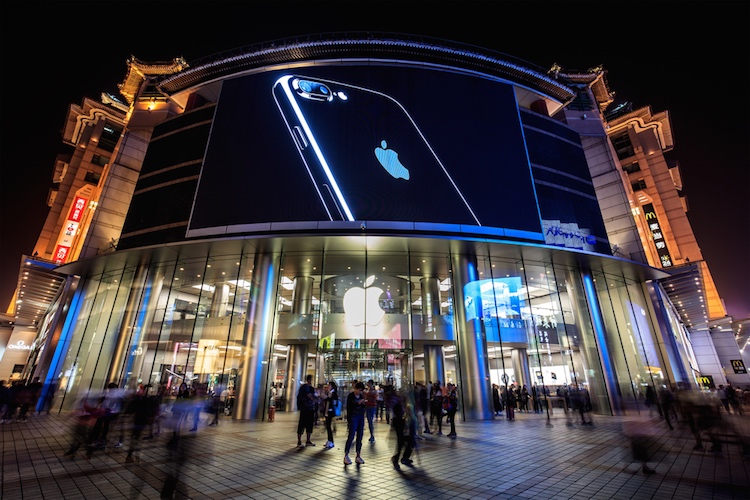 Android may still dominate iOS when it comes to platform market share, but when we look at the smartphone market on a device by device basis, the most popular smartphone remains Apple’s iPhone 7. According to new research data tabulated by Strategy Analytics, Apple sold 21.5 million iPhone 7 devices last quarter, followed in second place by the iPhone 7 Plus which moved 17.4 million units during the March quarter.

“We estimate Apple iPhone 7 shipped 21.5 million units and captured 6 percent marketshare worldwide in Q1 2017,” Juha Winter of Strategy Analytics said. “The iPhone 7 is by far the world’s most popular smartphone model, due to a compelling blend of user-friendly design, extensive supporting apps, and widespread retail availability for the device. Apple iPhone 7 Plus, with its bigger screen and higher pricing, shipped 17.4 million units for second place and 5 percent marketshare worldwide in Q1 2017. Apple today accounts for two of the world’s top five smartphone models.”

Looking at the most popular smartphone models, Apple’s iPhone 7 lineup is followed by the China’s OPPO R9s, the Samsung Galaxy J3 and the Galaxy J5. Here’s how the respective market share from the devices above break down. 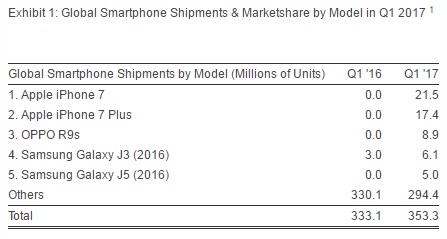 As for cumulative smartphone market share on a device level, the iPhone 7 sits at the top, enjoying a 6.1% share worldwide. As evidenced by the chart below, Apple’s iPhone 7 lineup alone accounts for 11% of all smartphones sold during the first quarter of 2017. All in all, this is remarkably impressive given that some critics and pundits were quick to categorize Apple’s iPhone 7 as a boring upgrade incapable of moving the needle.

For the quarter gone by, Apple last week disclosed that it moved 50.7 million iPhone units, though it doesn’t break down sales across specific devices. Tim Cook, though, did mention during the company’s earnings conference call that the iPhone 7 Plus performed remarkably better — especially in China — than the company had anticipated.