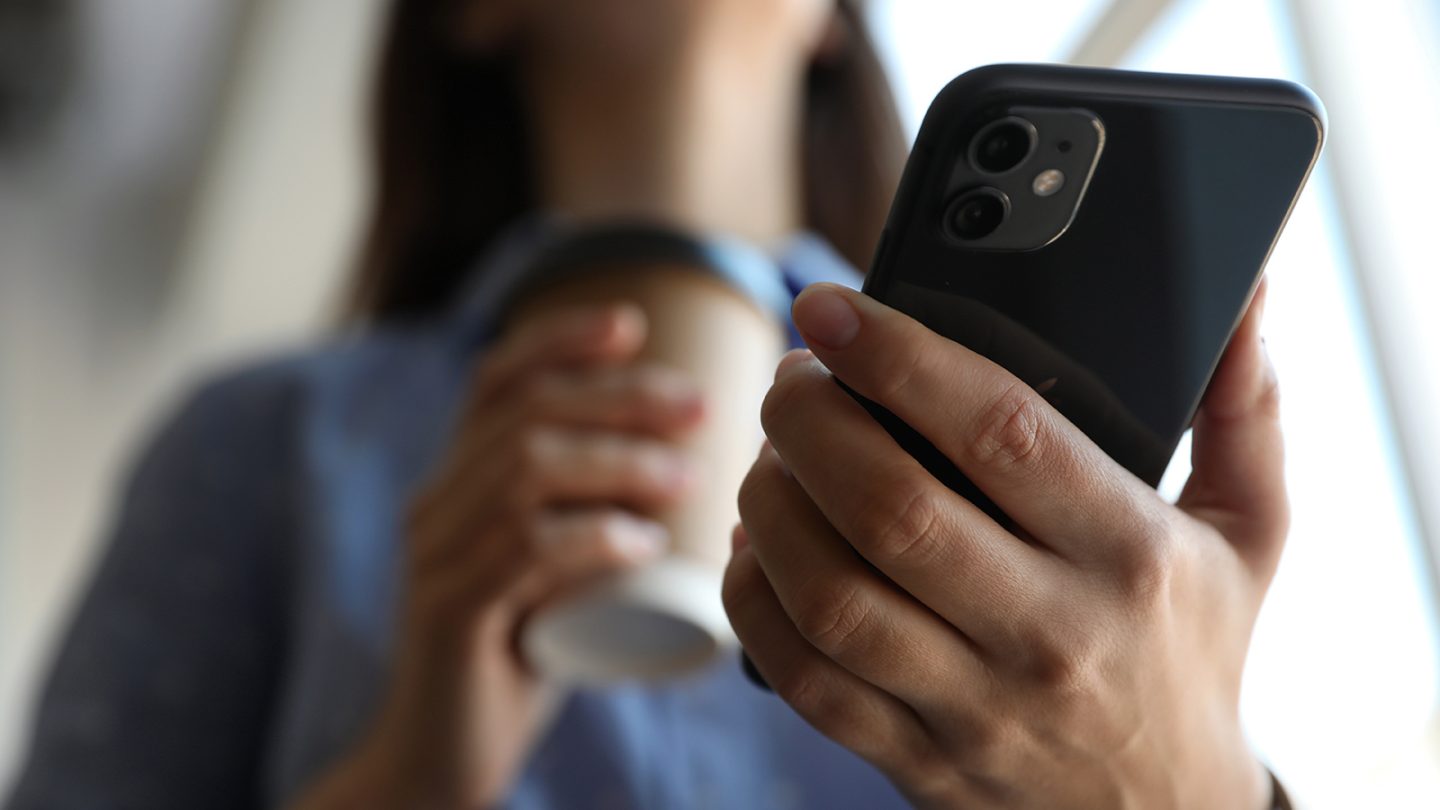 Back in April, we reported new sales data out from Counterpoint Research, which showed that Apple’s iPhone 12 series was not only selling like hotcakes but, according to the latest Counterpoint Research Market Pulse report, helped Apple capture six spots on the then-just-issued top 10 list of the global best-selling smartphone models for January 2021.

Moreover, there’s a whole generation of devoted Apple fans in the pipeline — teenagers, whose brand loyalty has gotten cemented early and who hint that things will probably stay this way. To wit: According to a recent Piper Sandler survey of more than 7,000 teens, Apple’s flagship consumer product carries immense brand loyalty among this demographic, 88% of whom own an iPhone now. And a little more than that, 90%, expect the next phone they own to likewise be an iPhone. This brings us to a new report just out from El Segundo, California-based network intelligence software company CUJO AI, a report that takes a closer look at the iPhone vs Android battle and underscores among other things just how cemented iPhone’s loyalty is among smartphone owners.

At a high level, according to the report authors, the data they looked at encompassed “1 billion connected devices in the span of 15 months between January 2020 and April 2021 … Our data shows what types of devices are online, their actual distribution, the overall market landscape as well as changes in popularity and how the pandemic impacted smart device usage on consumer home networks, which includes dozens of distinct IoT devices that make up the current smart home ecosystem.”

Taking a look at iOS devices some six months after the release of the iPhone 12 series, here’s a snapshot of iOS popularity in North America as of April 2021. Per this report, the most popular iOS devices and their respective market shares include the iPhone 11 (14%), iPhone XR (10.4%), and iPhone 7 (6.3%), and here’s how that breaks down in the form of a chart from the CUJO AI report: 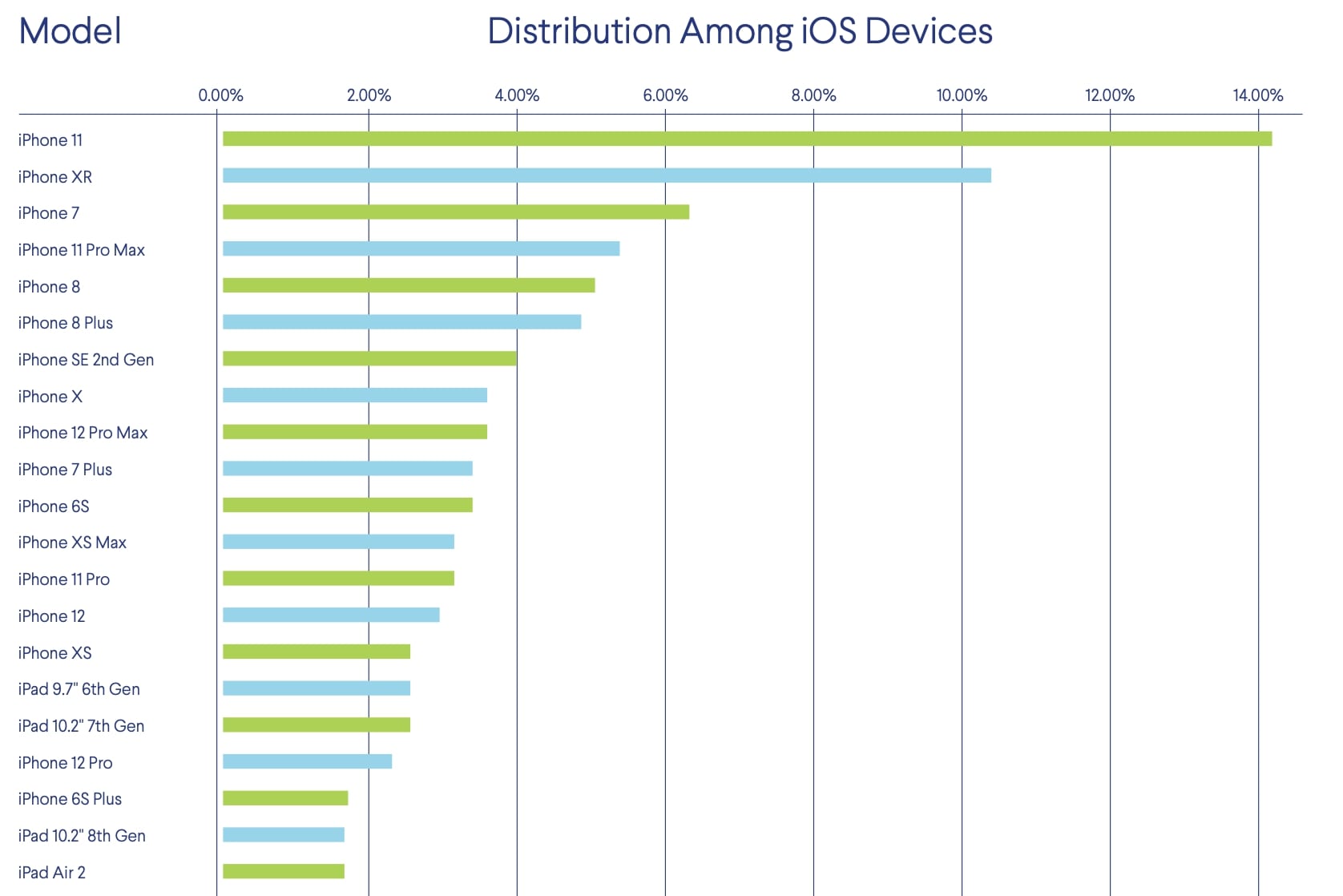 “In May,” the report continues, “new iOS devices made up 72% of new mobile devices. This short-term fluctuation was likely due to the release of the new iPhone SE 2 model. The budget iPhone may have seduced a significant number of Android users to switch over. Overall, the iPhone SE (2nd generation) is the fourth most popular iOS model as of April 2021, used by 3.7% of iOS users, closely followed by the newest flagship device iPhone 12 Pro Max.”

Now, let’s take a look at how different the picture is for Android devices. 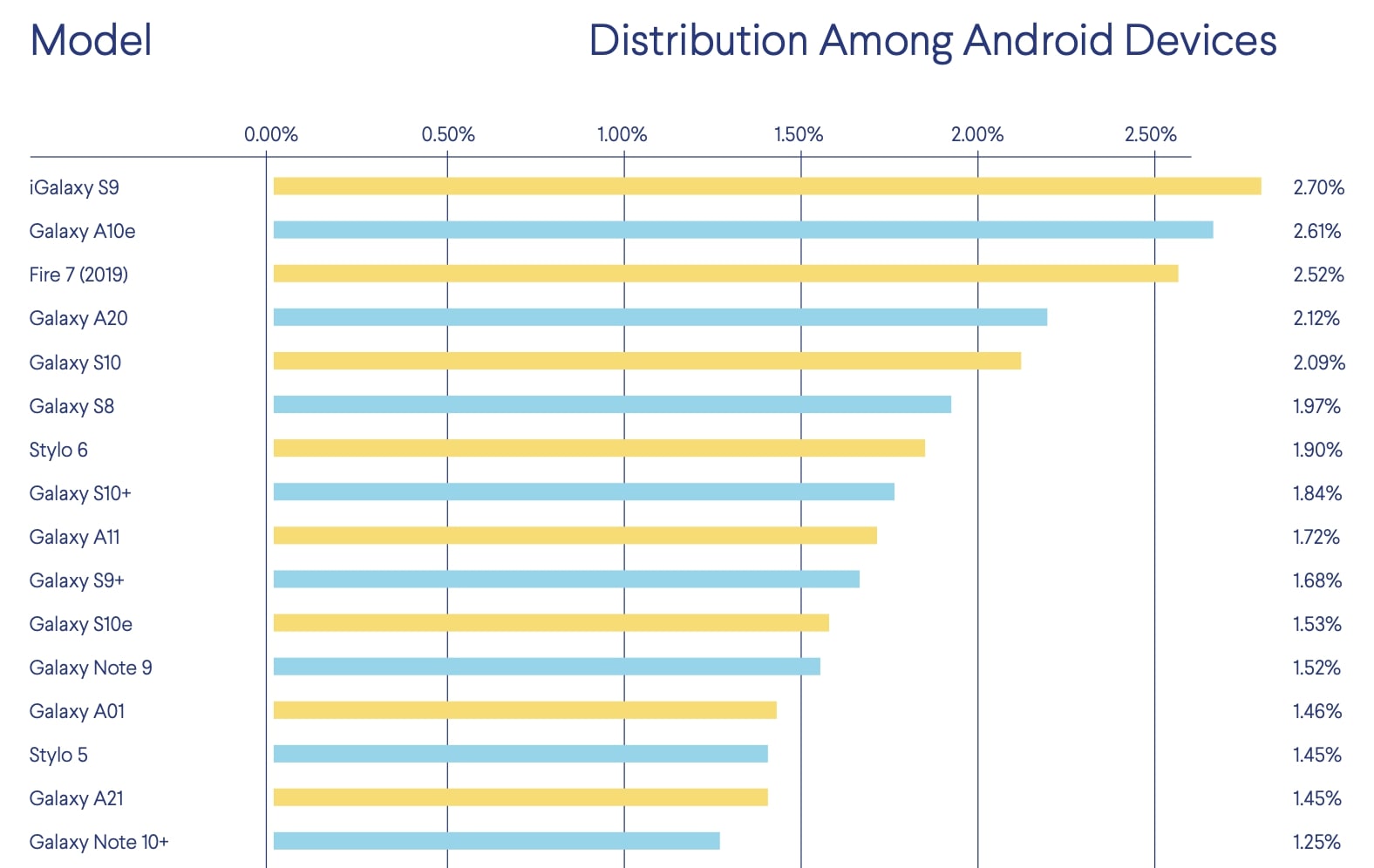 One factor about both device ecosystems that’s good is the fact that the CUJO data also shows that only a very small fraction are “end-of-life” devices. However, there are more than 7,000 different Android device models in active use in the CUJO AI database, compared to just 56 for iOS. “When we talk about Android security,” the company notes, “it is important to note that some vendors are better than others at providing information about their security practices. For example, Samsung makes it is easy to identify whether a device is still supported. It is also clearly communicated how long a new Samsung Android device will be supported. Unfortunately, this is not the case with many other vendors manufacturing Android phones and tablets.”