While the numbers surrounding iOS 11 adoption haven’t been as impressive as what we saw last year with iOS 10, Apple’s next-gen mobile operating system continues to pick up steam with each passing week. According to updated data posted to Apple’s developer page earlier today, 65% of all iOS devices are currently running an iteration of iOS 11. All in all, that’s not too shabby for an OS that was released just four short months ago. At the same time, 28% of iPhones and iPads are running iOS 10 while 7% of iOS devices are running iOS 9 or something even older.

What makes iOS 11 adoption all the more impressive is that the vast majority of Android users are still running iterations of Android that are many years old. According to Android’s developer dashboard, only 0.7% of Android users are currently running Oreo. What’s more, 73% of all Android devices are either running Marshmallow (which dates back to 2015) or an even earlier version of Android.

The full breakdown of Android adoption, as of January 8, 2018, can be seen below. Note how more than a quarter of all Android users are running Lollipop, which first saw the light of day in 2014. 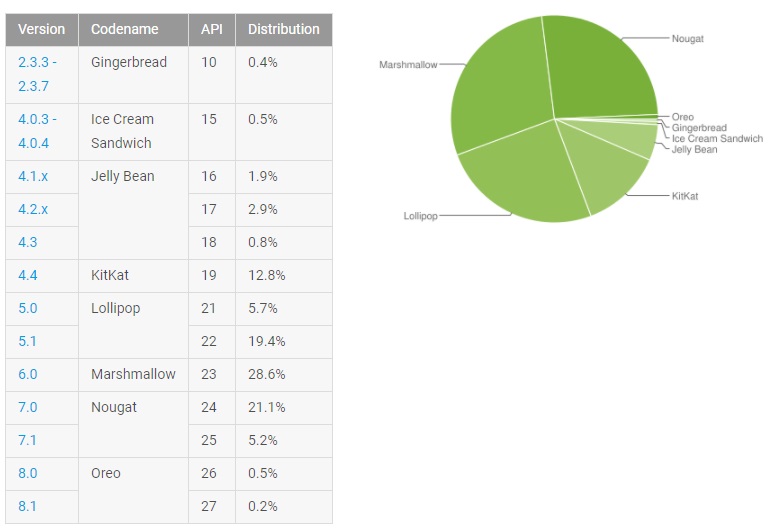 While there’s no question that Google in recent years has done a better job of increasing adoption of new OS releases, the company still has a long ways to go before catching up to Apple. So for as much as Google likes to tout many of Android’s newer and more advanced features, it’s worth noting that the bulk of Android users simply aren’t in a position to actually enjoy them.