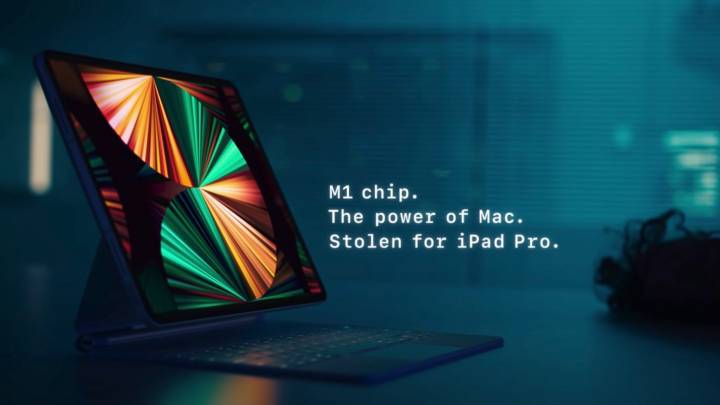 Apple delivered a hilarious iPad Pro promo during Tuesday’s event, where a daring thief attempts a Mission Impossible heist at Apple Campus. By the end of it, we learn that it was Tim Cook all along who stole the M1 processor for the iPad Pro, in what became a memorable meme-able scene instantly. The same “thief” might want to steal the power of Mac for iPhone soon.

Rumors preceding Apple’s “Spring Loaded” event said the A14X chip inside the 2021 iPad Pro would be as speedy as the M1 chip inside the three late 2020 Macs that Apple launched last November. The M1-powered MacBook Pro, Air, and mini have been widely praised for their performance and efficiency, with Intel delivering the ultimate compliment. This massive anti-Apple campaign highlights the chipmaker’s fear of the ARM future. Apple then did something completely unexpected. Rather than unveiling an A14X processor that would sit between the iPhone 12’s A14 and the Mac’s M1, the company went ahead and placed the M1 system-on-chip (SoC) into its most powerful tablet. As it stands right now, the M1 powers six different devices. In addition to the three 2020 computers, we also have the gorgeous 2021 iMac refresh, the 11-inch iPad Pro and the 12.9-inch iPad Pro. More Macs will likely receive M1 updates in the future as well as next-gen M-series generations.

With all that in mind, I can’t help but think that Apple is a few innovations away from putting the M1 chip inside the iPhone.

iPad Pro models come with more powerful chips than other tablets in Apple’s lineup and the iPhone for a simple reason. The iPad is a lot larger than the iPhone, so it packs a much larger battery than the handset. Apple has always looked at offering the best possible performance out of its mobile devices and the best possible battery life.

iPads, especially the Pros, can do a lot more than iPhones so that extra power comes in handy. That’s why the iPad Pro upgrade to M1 makes sense. A14 and M1 are all marketing names meant to designate different processor generations. Putting an A14X SoC in between would add another layer of complexity to Apple’s supply chain that’s unwarranted. After all, the iPad Pro’s performance upgrade over the iPhone 12 has to be formidable. A14X would not be enough to convey that — after all, the 2020 iPad Air does ship with the same A14 Bionic chip as the iPhone 12 series.

Let’s not forget about Apple’s clear strategy to bring uniformity to its products. iOS and macOS are distinct operating systems, but they’re nearly identical when it comes to the overall user interface. An iPhone user with no macOS experience would be able to use a Mac immediately and vice versa. The iPhones, iPads, and Macs have similar designs, especially the iPhone 12, iPad Pros, and the brand new iMac. Bringing the same sense of uniformity to chip choices is simply the next move.

The same M1 SoC that powers the new iPad Pro is also found inside the iMac, which might have seemed impossible a few years ago. This will further fuel Intel’s ARM nightmare. Not to mention that the iPad Pro set the bar so high that Android tablets will have a tough time competing in the near term.

All of that makes me think that Apple might be close to bringing the same M1 chip to iPhone. It might not be just one innovation that makes it possible. The M1 chip might be too large for the iPhone, where internal space is at a premium. It would also consume more energy than the A14.

Apple would need to find a way to increase the efficiency of M1 chips before using them inside iPhones. A different approach is coming up with a breakthrough battery technology. Another option is increasing the overall size of the iPhone, and a foldable iPhone might be the kind of iPhone that gets an M1 successor.

There’s a clear case for having Apple use the same high-end processor for all its high-end devices. Apple could pitch buyers a similar computing experience, including design, UI, and power, regardless of screen size. That would be a massive advantage over what Android can offer. After all, the M1 is no longer just Intel’s nightmare. Every Android tablet maker has been put on notice. Unreleased 2021 Android tablet flagships are already inadequate.

Some might say there might be a case against using a Mac chip inside the iPhone. The same power available on a computer or tablet might not be required from a phone. But A M-series processor could power future iPhone experiences, like the rumored AR and VR glasses that Apple is manufacturing. Not to mention that the faster the iPhone chip, the longer that handset’s life will be.