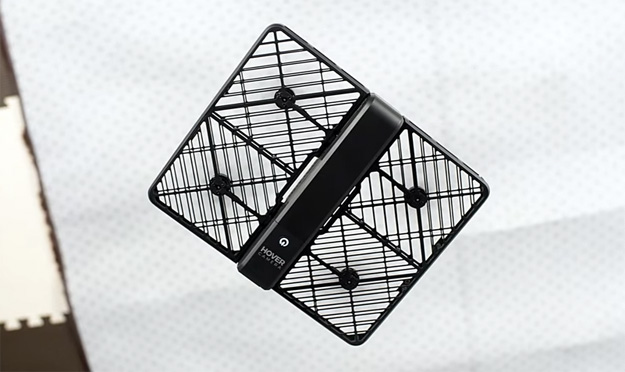 It really shouldn’t be this refreshing to see a company unveil a drone that’s actually a drone, but alas. The term “drone” has been broadened to include a wide range of popular quadcopters that don’t have any autonomous capabilities at all, but there are still some companies building real drones for consumer use. Back in February we told you about an awesome drone that can follow you and record your every move with its built-in camera, though it’s a bit pricey for some. If you don’t want to part with that kind of cash you’ll be happy to learn that a new drone called the Hover Camera will soon be released, and it offers similar functionality in a much more compact design at a fraction of the price.

Created by Zero Zero Robotics, the Hover Camera is a compact UAV with an integrated high-definition camera and an intriguing design. The drone folds in half when it’s not in use so it can be stowed easily, and then it opens into a square shape when it’s ready to launch. The outer housing protects four vertically positioned propellers, and the Hover Camera’s quad-core processor and other gadgetry is contained within a compartment that runs down the center.

Here’s where the fun begins. Once airborne, the Hover Camera will follow a subject autonomously as he or she moves and record all the action with its 13-megapixel camera. The camera records video at resolutions up to 4K Ultra HD. The device can also rotate in place to take 360-degree panoramic photos, and it has plenty more tricks up its sleeve.

Zero Zero Robotics is aiming to price the Hover Camera at less than $600 when it’s made available sometime this summer, and the company is currently making early models available to a small number of users in a limited release.

A video of the Hover Camera in action is embedded below.