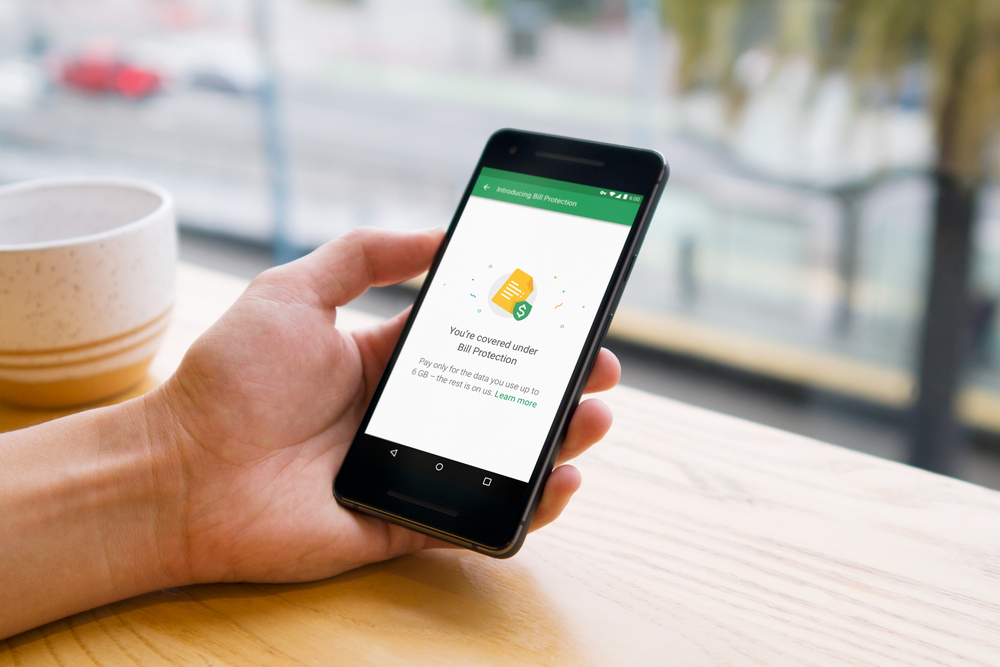 Google’s Project Fi has built a reputation for being the simplest mobile carrier out there. You pay $10 per gigabyte for the data that you use, with the only fixed monthly fee being a $20-per-month charge for unlimited calling and texting. Compared to other carriers with various tiers of “unlimited” plans, data add-ons, rollover buckets and introductory offers, it’s a refreshingly simple setup.

But the latest trend in cell plans is unlimited data, and from that perspective, Google’s system has always been expensive. No wireless plan you can get now is really “unlimited”: they all have deprioritization limits, after which your data speeds get throttled, that kick in somewhere between 20GB to 50GB. Those plans cost $60-$80 a month for a single line, which is a whole lot cheaper than the $200-$500 you’d have to pay Project Fi for the same amount of data.

That competition probably explains why Google is unveiling a new feature today that it’s called Bill Protection. Basically, Fi will cap your monthly data bill at $60 a month ($80 when you include that $20-a-month cost for texting and calling), regardless of whether you use 6GB of data or 60GB. If you use less than 6GB, you’ll pay the same $10-per-GB cost that Fi customers pay right now.

The only catch here is that Google is still including a deprioritization threshold. “If you’re a super heavy data user, you’ll experience slower data speeds in months when you’ve consumed more than 15 GB of data (less than 1% of current Fi users today),” Google explains, although you’ll still have the option to pay for full-speed data above 15GB, at the same $10-per-GB rate.

There’s a lot to like in this new Project Fi plan. Even compared to T-Mobile, which has the simplest and most transparent pricing of any of the big four carriers, this is a simple and customer-friendly move. No existing Project Fi customer is going to pay more under this new pricing scheme, and adding certainty to your phone bill — no $300 shocks! — is a big selling point for customers these days.

But for heavy data users, it’s less of a slam-dunk. Project Fi’s $80-per-month pricing is at the top end of the market, and all of the wireless carriers offer major discounts for adding additional lines, which can bring the cost per line of unlimited data down to $40 a month in some cases. Now, those carriers do mess with your data a little more, most notably by maxing out video quality at 1080p, but the unlimited plans from Verizon or T-Mobile still make sense for heavy data users, especially anyone with a family plan.

According to data published just yesterday, however, that’s a particularly rare scenario. The average postpaid customer — even on T-Mobile, where unlimited data plans are the only plans offered any more — doesn’t use more than 5GB of data in a month. If you’re the kind of person who normally ticks along with a few GB of data use every month, but occasionally goes way over that amount, the flexibility of Project Fi’s plan could save you a lot of money.

The changes are being applied now, and existing Fi customers should see the pricing changes rolled out on their next bill.