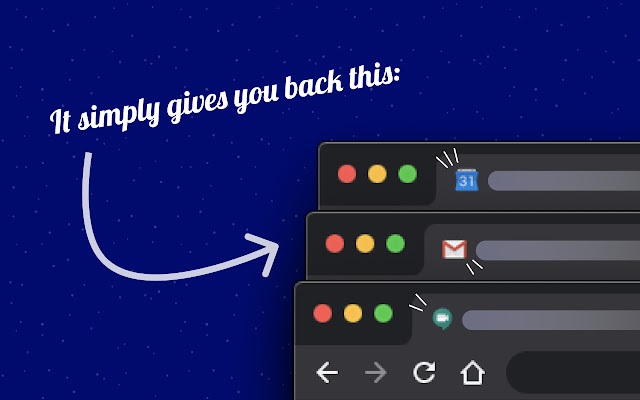 In an affront to design and good taste, Google recently updated the app icons for its biggest services as part of a G Suite rebranding. That in itself wouldn’t have been a problem, but the icons are hideous and all look nearly identical, which makes it hard to tell if you’re clicking on the Google Calendar icon or the Google Meet icon.

The all-new Google Workspace “brand identity” has been universally derided, and I can confirm that it has made the bookmarks bar on my own Chrome browser more confusing than ever (which I genuinely did not think was possible). The good news is that there’s actually a way to change the icons back, and you can do it right now.

On Wednesday, Gizmodo spotted a free extension on the Chrome Web Store which changes all of the icons back to the design that we’re all more familiar and comfortable with. Once you install the extension, Gmail, Meet, Calendar, and Drive will all revert to the icons that they had before Workspace was revealed last month.

Here are just a few of the reviews from people who have installed the extension in Chrome:

It’s worth noting that some people are complaining that the extension has a few bugs, such as Slides and Sheets having the same icon as Docs, and Gmail not showing an accurate count of unread emails in the browser tab. This extension just launched, and the developer will hopefully update it in the days ahead, but it’s worth noting that you will have to make a few compromises (at least for now) if you decide to install this extension.

Finally, according to the developer’s website, Firefox will get a matching add-on as well in the future.