In the history of the smartphone market, we’ve never seen anything like the swing we’re about to see from Samsung between 2018 and 2019. Last year’s Galaxy S9 and Galaxy S9+ were quite possibly two of the most boring smartphones of the past decade. They were sleek and powerful, sure, but they were practically identical to the Galaxy S8 and Galaxy S8+ that launched a year earlier. In terms of design, they were exactly the same on the front and almost the same on the back, aside from a relocated fingerprint sensor. And in terms of features, the Galaxy S9 and S9+ offered nothing at all that was new and worthwhile. That’s right, Samsung’s Galaxy S9 flagship phones didn’t introduce a single new marquee feature, and that’s why they ended up being Samsung’s worst-selling Galaxy S phones since 2012.

Long story short, 2018 was an absolute bore for Samsung fans… but we’re about to see a massive reversal in 2019. Samsung is prepping not two but three new flagship phone series that will be released this year, and they’re all shaping up to be some of the most exciting smartphones we’ve seen in years. The foldable phone set to be released in a few months is getting all sorts of attention, and we expect plenty of nifty new features on the Galaxy Note 10 in the second half of the year. The excitement starts much sooner than that, though, because Samsung’s next-generation Galaxy S10 phones are set to debut just two weeks from now.

Samsung’s upcoming Galaxy S10 series is a complete reimagining of its Galaxy S phones. As we’ve seen in countless leaks and reports, these phones are going to be packed full of new features that will all be crammed into a completely overhauled design. The Galaxy S10, S10+, and entry-level S10e will all sport beautiful new all-screen designs that minimize the bezels above the display by placing their selfie cameras under the screen itself, with holes cut out above them so they’re not obstructed.

Beyond that, the two main Galaxy S10 models will sport special ultrasonic fingerprint sensors embedded under the screens, as well as exciting new triple-lens camera systems around back. That’s just the tip of the iceberg too, because they’ll also introduce plenty more things that we’ve never seen on a Galaxy S phone before, such as the ability to wirelessly charge other devices.

On top of all that, the world’s top Samsung insider teased something intriguing way back in early January. The big smartphone design trend in China right now is gradient color finishes that fade from one color to another on the back of the phone. It’s a very nifty effect, and there had been a few early rumors that the Galaxy S10 might feature gradients on one or two of its color options this year. Ice Universe put that rumor to bed though, but he also teased something equally intriguing. Here’s what he tweeted at the time:

It was difficult to visualize exactly what he was talking about, but now a new leak gives us a look at not one but two of the “gorgeous and lustrous” finishes Ice Universe was talking about. The following leaked press renders were posted on Wednesday morning by gadget leaker Roland Quandt:

Here's what the "Ceramic Black" variant of the Samsung #GalaxyS10 Plus looks like compared to regular Prism Black. Both are official press renders… didn't even notice the difference at first. Ceramic has a bit of a metallic/brownish hue to it, that is also visible on the frame. pic.twitter.com/GUtG9us3Dj 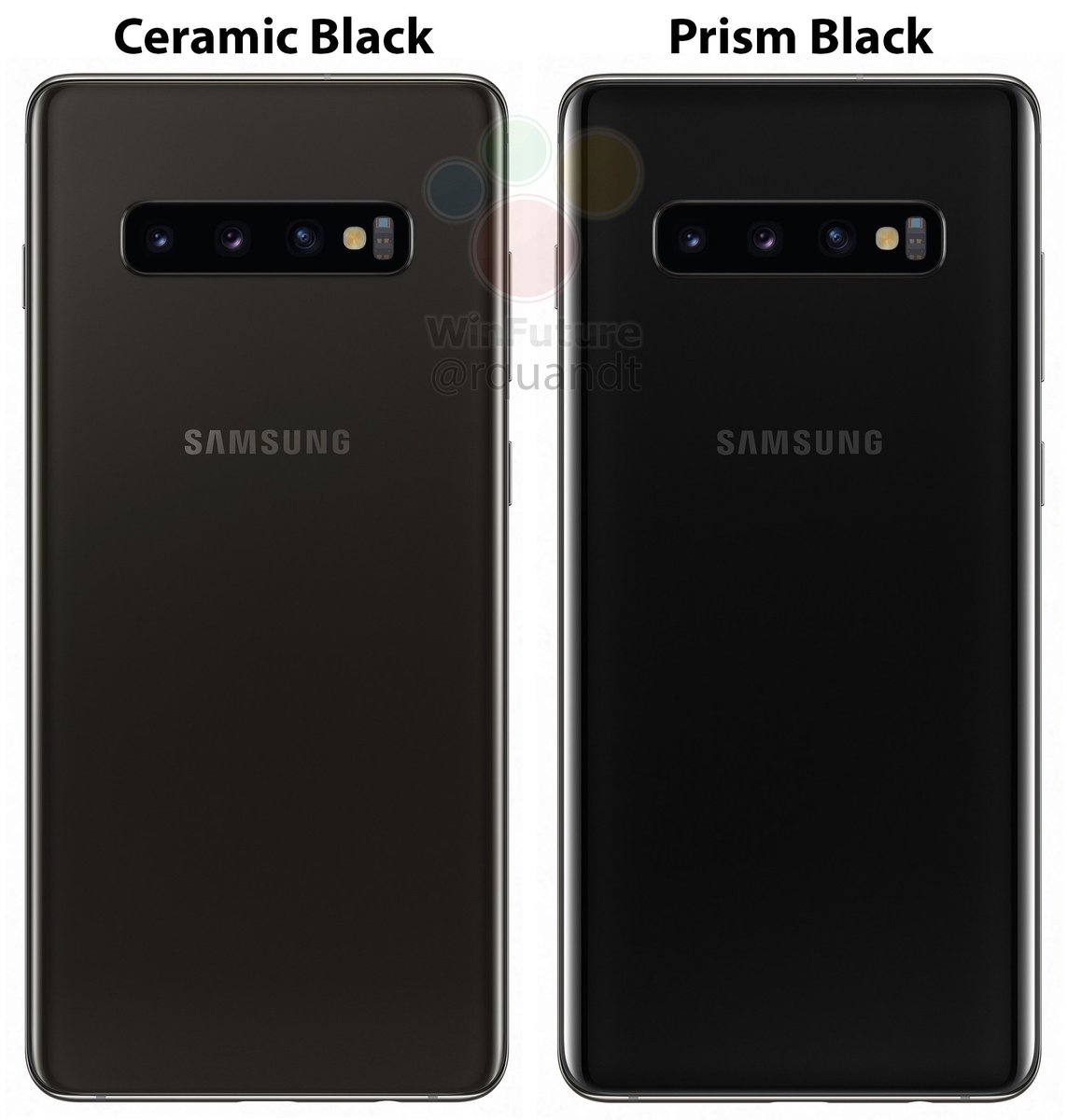 We have a feeling we’ll need to see these new finishes in person to truly appreciate them. You simply can’t appreciate phones with finishes that reflect light in special ways when all you have is a render. Even still, we can see that Samsung plans to offer two distinct black finishes this year, and one of them, Ceramic Black, appears to have a unique mocha hue. We can’t tell from the render but we’re guessing the other one, Prism Black, will reflect faint traces of color when the light hits it just right.

Samsung will unveil the Galaxy S10, Galaxy S10+, and entry-level Galaxy S10e on February 20th during an Unpacked press conference in San Francisco. According to multiple reports, the phones will then be released two weeks later on March 8th.