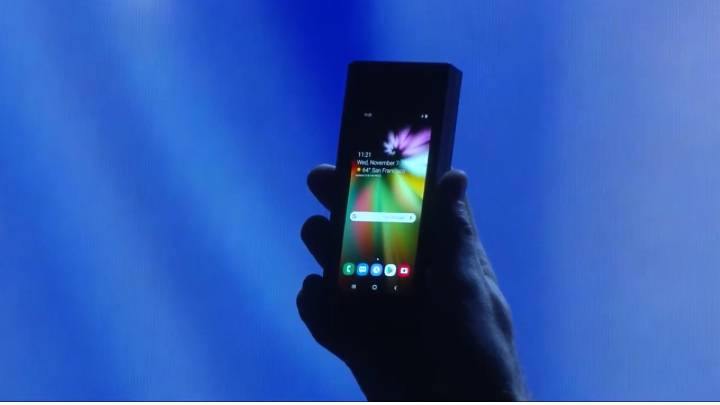 From the moment Samsung started copying the iPhone (and we have this 132-page work of art that history will never forget to prove it), it only had one thing going for it: specs. Bigger screens, more chip cores, more RAM, and more megapixels. That’s what Samsung did for years, while still following the iPhone’s lead closely.

This led to the Galaxy Note phablet, a large phone that looked almost like a tablet. Samsung wasn’t the first to create such a monstrosity — Dell Streak anyone? — but the Galaxy Note line from Samsung became all the proof anyone needed that people wanted bigger screens in smartphones.

Fast forward to November 7th, 2018, when Samsung unveils the Galaxy F foldable phone, a natural evolution of the smartphone. Well, it’s a soft launch, which would have been enough to grant Samsung the “world’s first” foldable phone title. But someone already beat Samsung to it a few days ago, and that gimmicky but foldable device is already available for pre-order. With all that in mind, I have to say that I’m more interested in foldable handsets than I ever was in phablets. Even Samsung’s Galaxy F sounds a lot more exciting than I originally thought.

A while back I said that I wouldn’t pay $2,000 — the rumored price of the Galaxy F — for a foldable iPhone, let alone a Samsung phone. But since then I’ve started reconsidering my stance. A foldable handset will be more expensive than any regular “all-screen” phone, but that’s the only way to extend the display of a smartphone further now that we’ve reached the edges of the handset. And companies aren’t just developing foldable smartphones. Samsung is unveiling the Galaxy F, but it’s also rumored to be working on foldable laptops. So is Lenovo.

These foldable devices would not only increase the available screen real estate and their portability, but they’ll also force innovation that we desperately need in regular phones.

It took Samsung six years to launch a Galaxy S phone worth looking at and holding. Since it abandoned plastic, Samsung proved it can make high-end handsets that look and feel amazing. The Galaxy F will be judged by the same standards. That means Samsung will have to find ways to make it feel as premium as the Galaxy S9 or Note 9, and at least as durable. Regular premium phones are made of glass, and that glass can crack if dropped the “right” way, no matter how advanced glass technology is right now. The Galaxy F, with its large internal screen and the small external display, will also be prone to accidents. So, in the long run, Samsung has to find ways to make glass and plastic display films even more durable.

Foldable phones will also have to be relatively thin, so they can be pocketed with ease when folded into a wallet-like shape, which means device makers will have to find novel ways to power them. Just because it has a bigger footprint than a regular smartphone, the Galaxy F won’t necessarily pack a significantly bigger battery. Components like the hinge that makes folding possible will take up plenty of space, which means Samsung has to develop new battery technologies, like the rumored graphene ones, or go for true, long-distance wireless charging for future models. That’s because those screens, as well as the upcoming 5G tech, will consume even more battery than regular phones.

Finally, there’s software. When I first said that Samsung’s expensive phone won’t interest me, I had the software experience in mind — well, that $2,000 rumored price tag also played a role in it. Gone are the days when Galaxy S and Note models were bloatware magnets. Samsung has significantly streamlined the user interface it overlays on top of Android since then, so that’s not a problem. But the best thing about the Galaxy F’s UX is that Samsung hasn’t been developing it by itself. Google’s involvement signals the fact that Android — and especially Fuchsia — will be ready to support foldable devices of all sorts in the very near future. Google’s commitment signals that we might have flexible Pixels later down the road.

Yet, Samsung isn’t the only company making foldable devices. Waiting in the wings are several of Samsung’s biggest rivals, including Apple, Huawei, LG, Lenovo, and many other Chines Android vendors. Then there’s Microsoft, which is still working on a foldable-like Surface Phone smartphone/laptop.

In other words, the Galaxy F is certainly going to be a device that will spark future smartphone innovation in years to come, requiring plenty of advances in design, build quality, energy efficiency, and software. Should the Galaxy F, and all foldables, fail, then we’ll know we need a different way to increase the smartphone display beyond its physical boundaries. With all that in mind, I’m excited to see what Samsung does with the F, even if I don’t buy the first-gen model.