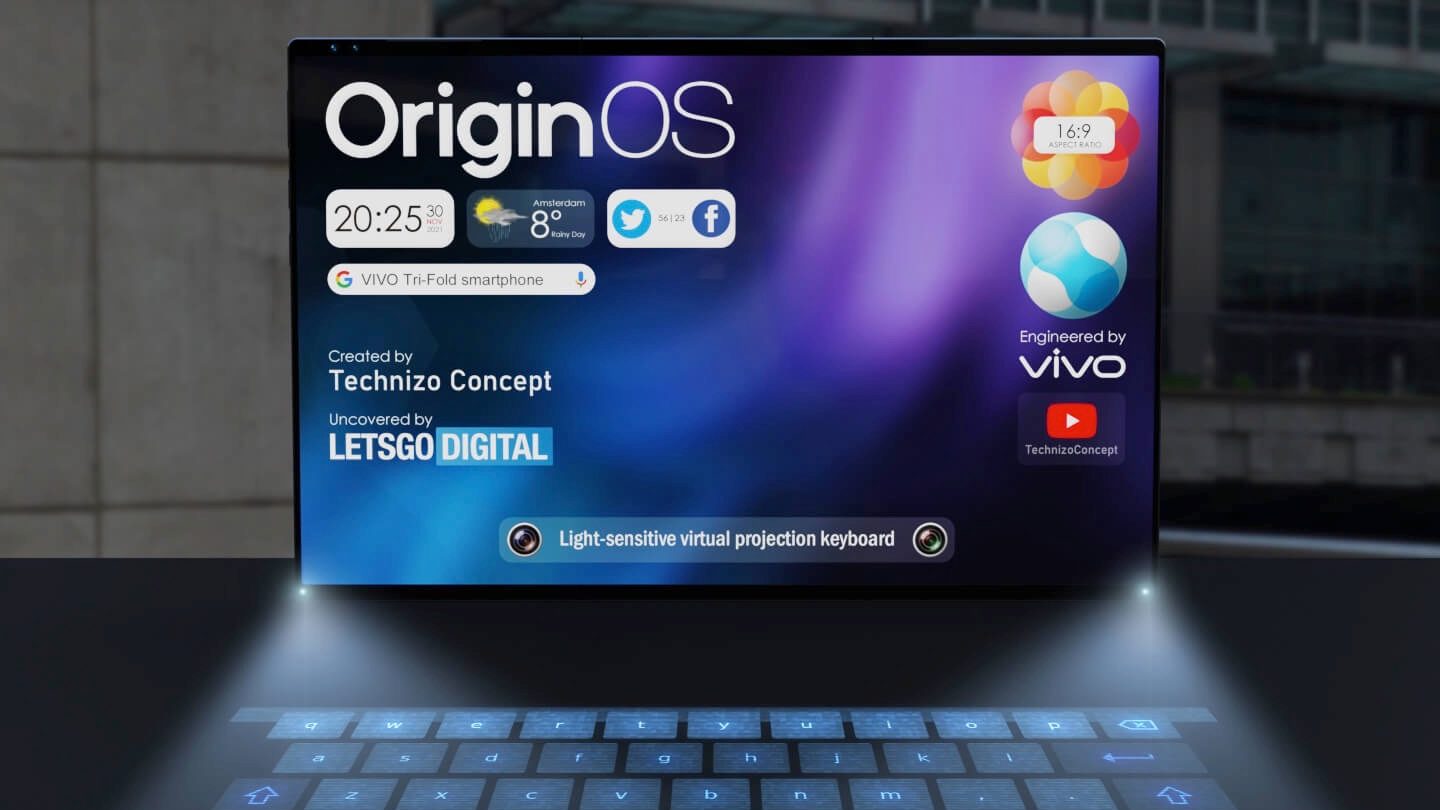 Samsung’s Galaxy Z Fold 3 and Flip 3 are the best foldable smartphones you can buy right now. They’re not perfect, but they’re better than anything of Samsung’s previous attempts when it comes to durability. They’re also more affordable than ever, and Samsung included the new Fold and Flip smartphones in several Black Friday sales that further discounted the entry price. But several of Samsung’s big rivals from China plan to launch foldable handsets soon. And they’re researching even crazier concepts for foldable devices. Like Vivo’s hinge-less, tri-fold foldable smartphone in these renders that can project a full laptop keyboard in front of it.

There’s a lot to digest, as the device that LetsGoDigital discovered in a brand new Vivo patent seems out of this world.

The craziest part seems to be the hinge-less folding mechanism. Foldable handsets typically feature a hinge that allows the two halves to rotate, folding and unfolding. The hinge also sustains the part of the screen that folds. A side-effect of the hinge is that it causes creasing, no matter the folding mechanism. That’s because the foldable screen has to bend opposite the hinge.

Vivo uses a telescopic mechanism that can feature internal or external components to fold the three sides of this foldable handset. It’s not perfectly clear how the telescopes work or what it means for the handset’s fragility. But the absence of the hinge does have an advantage.

The three display components do not seem to feature a continuous folding display. Each side seems to have an edge-to-edge screen. Instead of creases, we might have tiny gaps in the screen. That’s what the patent illustrations imply.

The renders that Parvez Khan created for LetsGoDigital imagine a continuous foldable display for the device. But the foldable that Vivo imagined features flat edges that can’t exist in a foldable handset. At least one side o the phone would have a rounded edge, as the display wraps around it and the hinge beneath it.

We saw similar foldable phone concepts from other companies, Samsung included. This tri-fold form factor is often called a Z-foldable because of how the three screen sides fold and unfold. They resemble the letter “Z,” as seen in Samsung’s Z Flex concept above. The left or right side of the foldable screen continues to act as a cover display when the handset is folded. The other two displays face each other in folded mode. But those Z foldable concepts work with hinges.

Finally, the Vivo foldable features a technology that we’re yet to see on commercial smartphones or tablets. That’s the keyboard projection that would turn this foldable smartphone into a laptop. Presumably, you’d need an accessory to hold the unfolded Vivo smartphone in position. The device would also have to sit at a certain height on a desk so that the laser projectors can interpret the user’s typing gestures.

The actual Vivo foldable phone will be different

With all that in mind, this particular design for a foldable Vivo smartphone seems unlikely to happen anytime soon. Vivo might launch foldable devices that look more like the Galaxy Z Fold and Flip phones in the near future. After all, Vivo is part of the same conglomerate that owns Oppo and OnePlus. Oppo is making foldables of its own, as is OnePlus, which is an Oppo subsidiary.

But Vivo might employ some of the technologies presented in the patent in future devices. That might be the real purpose of the patent. Vivo doesn’t have to use all these innovations at the same time in future gadgets. And some of the inventions, like the keyboard projection system, would also work in non-foldable devices like tablets and traditional smartphones of the future.