Admittedly, the iMac design hasn’t changed all that much over the past decade. Sure, bezels have gotten a bit tighter and the overall form factor a bit slimmer, but by and large, the iMac of today isn’t all that different stylistically from the iMac of 2014 or even 2010. Today, Apple decided to spice its iMac lineup and, suffice it to say, we’re beyond excited.

Apple’s brand new iMacs will feature the same M1 processor introduced last year on its line of MacBooks. Without question, Apple’s new iMacs will be absolute screamers. Apple claims that its new 24-inch iMac is a whopping 85% faster than the most recent 21.5-inch iMac, offers 2x faster GPU performance, and delivers 3x faster machine learning thanks to the 16-core Neural Engine in M1.

Apple’s brand new iMacs, for the first time since the days of the G3 iMac, will come in a variety of seven colors. And while this isn’t exactly a gamechanger, it’s certainly nice to have more color options. While the standard aluminum design is sleek and can fit into almost any room with ease, a more varied selection of colors will arguably help drive sales ever so slightly. The new colors include aqua green, yellow, orange, red, purple, blue, and traditional silver aluminum. 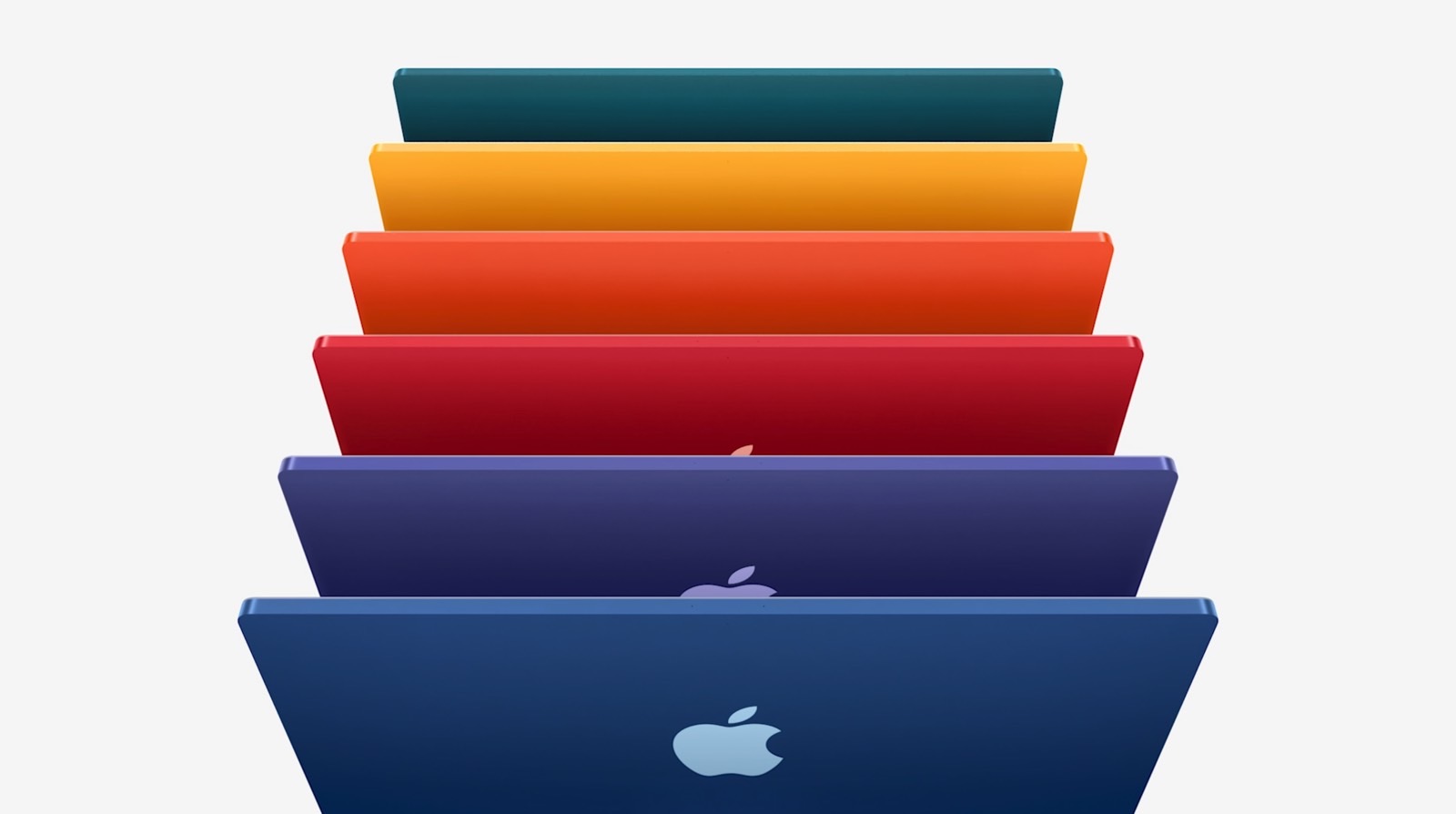 Beyond new colors, Apple’s new iMacs also boast slightly slimmer bezels all around which allows them to deliver a 24-inch machine. The overall display is decidedly thinner and checks in at 11.5mm. Apple boasts that the overall volume of the new iMac has gone down by 50% compared to the 21.5-inch model. 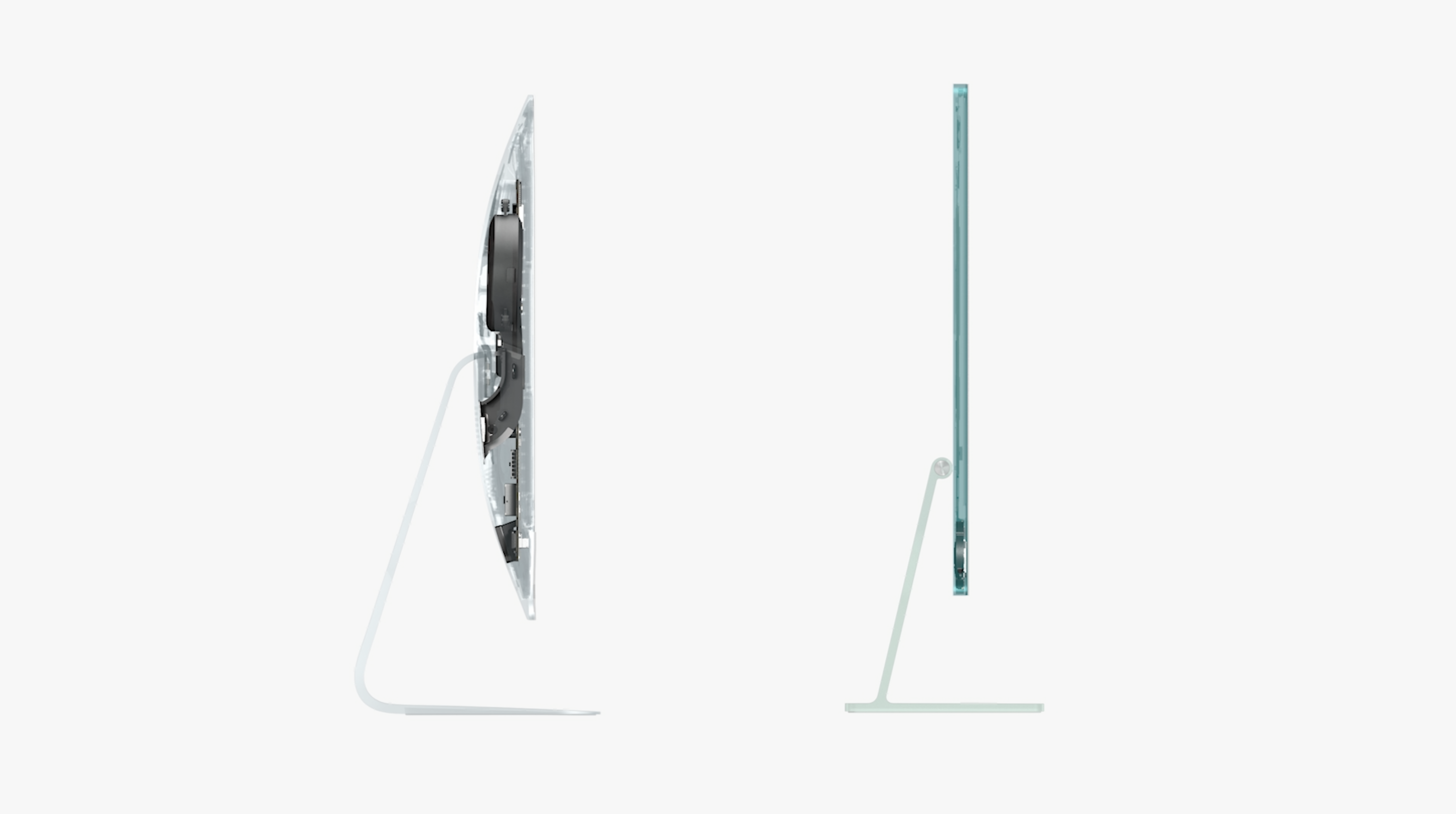 Hardware-wise, the new iMacs boast 1080p FaceTime HD cameras for vastly improved picture quality when video chatting. Apple notes that it’s the best camera they ever put into a Mac. The new iMacs also come equipped with studio-quality microphones. The speakers on the iMac also received a huge improvement with more powerful bass and a 6-speaker system with various elements borrowed from the HomePod. What’s more, the iMac also supports spatial audio.

The new iMac also features the best sound system ever in a Mac. It has two pairs of force-cancelling woofers placed side by side for an impressive bass response, while reducing unintended vibrations. Each pair is balanced with a high-performance tweeter. The result is a six-speaker sound system that produces a massive sound stage with strong, articulate bass and crystal-clear mids and highs. All of these speaker innovations, coupled with advanced algorithms, enable iMac to support spatial audio when playing video with Dolby Atmos.

The new iMac features an expansive 24-inch 4.5K Retina display2 with narrower borders and 11.3 million pixels. With a P3 wide color gamut and over a billion colors, plus 500 nits of brightness, images are vivid and more brilliant. This new display also features True Tone technology, which automatically adjusts the color temperature as the environment changes for a more natural viewing experience. In addition, the 4.5K Retina display on the new iMac has an industry-leading anti-reflective coating for greater comfort and readability.

The new iMacs also come with a range of keyboard options. One option, for example, includes new buttons to quickly access spotlight, dictation, Do Not Disturb, and Emoji keys. Another option, meanwhile, includes support for Touch ID. 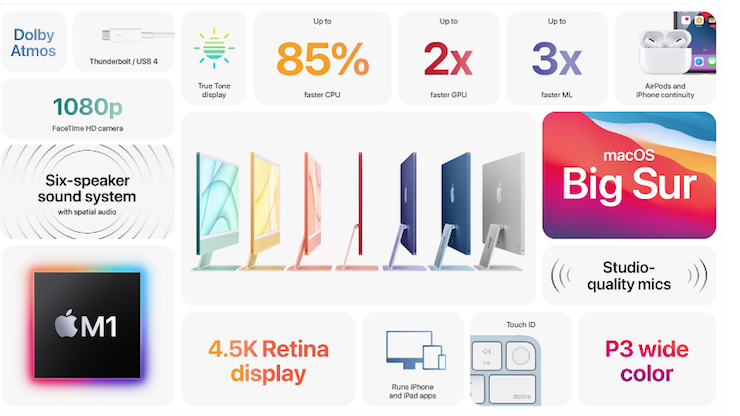 Other features include a 4.5K Retina Display, color-matching options for the Magic Mouse and Magic Trackpad, Wi-Fi 6, and a novel magnetic power connector which can be seen below:

The entry-level new iMac will retail for $1299 and will be available for pre-order on April 30. Deliveries will begin in the second half of May.

The available models are as follows:

This is without question the biggest iMac update we’ve seen in years, if not over a decade. And seeing the performance the new iMacs deliver thanks to the M1, Apple’s decision to ax the iMac Pro now makes a lot more sense.

Tweet
Apple TV 4K: Here’s everything you need to know about the update Apple just unveiled