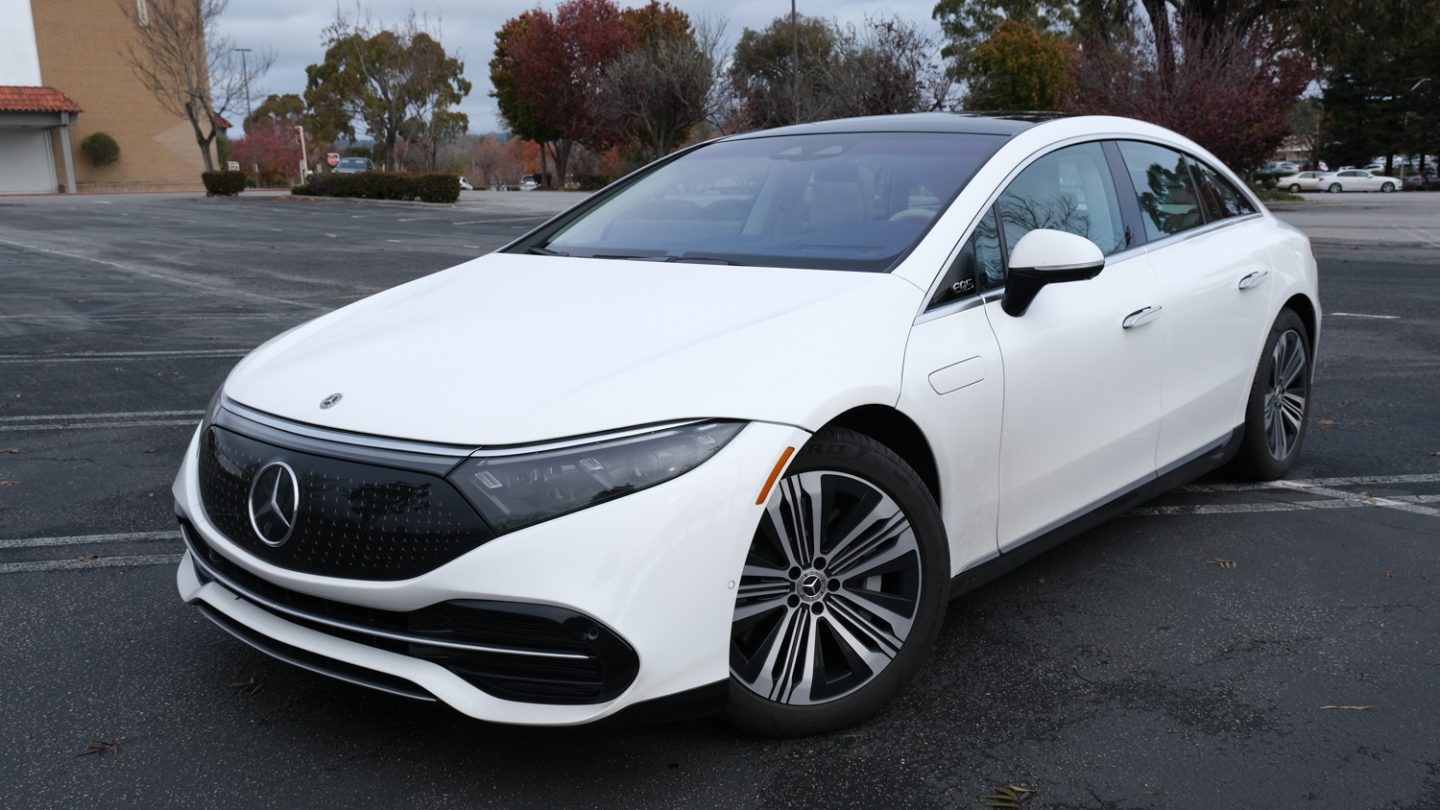 Electric cars have made a big splash over the last few years, but at the high-end, the Tesla Model S is still the electric car king. Finally, however, there’s some competition at the top. The Mercedes EQS450+ is the first in Mercedes’ EQ line of electric cars and has the luxury you would expect from a high-end Mercedes-Benz.

But at a starting price point of over $100,000, the EQS competes directly with some of the best electric cars to date — including the Tesla Model S, the Porsche Taycan, and the Lucid Air. Does Mercedes’ almost century-long experience in building high-end cars mean that it’s able to produce a better car overall? I’ve been using the Mercedes EQS450+ to find out.

The Mercedes EQS is the most luxurious electric car to date. But it’s not for everyone. With a starting price of over $100,000, the EQS is only for those that want ultimate luxury. 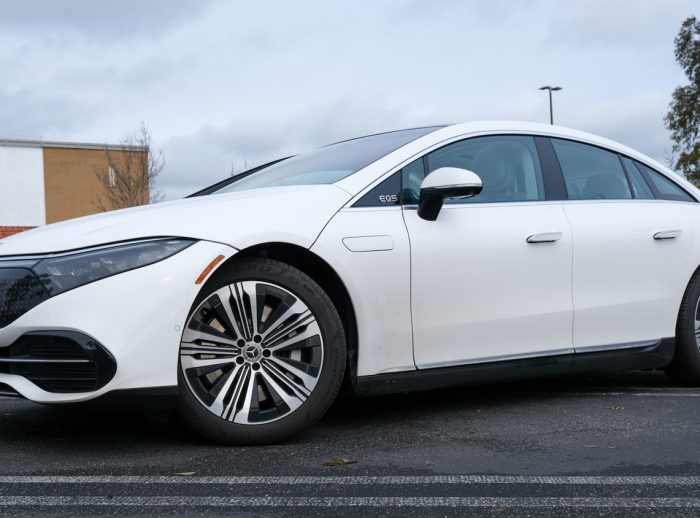 The exterior design of the EQS is a bit of an acquired taste. It’s not necessarily an ugly car, but the overall shape of the car does take some getting used to. It has a very blob-like design, which Mercedes says helps reduce drag. It has a large, bulbous nose, with relatively sleek lines throughout. I don’t hate it, as some do, but I don’t love it either.

There are plenty of things that I do really like about the design. By default, the car comes with stunning 20-inch 5-spoke wheels with black accents, which is what we have. You can upgrade to up to 22-inch wheels, which also look great, based on renders. The car has nice retractable door handles, with automatically protrude when you approach the car with the key, and retract when you lock the car. And, it can even automatically open the door when you get close to it, and close the door when you get in and tap on the brake. Cool!

The best thing about this car has nothing to do with the exterior design, but it still looks fine.

If you care about a luxury experience, you’ll get it in the Mercedes EQS. The interior of the car is stunningly designed, offers a ton of customization, and makes driving that much more exciting. Everything is soft to the touch, offers premium stitching, and simply looks awesome.

Of course, perhaps the elephant in the car is the massive Hyperscreen, which is really a collection of three screens that span the entire dashboard. We’ll get into it a little more later. The screen does collect fingerprints, which is the main downside, but in general, I love the overall look and functionality of the Hyperscreen.

There are tons of details and features to the interior of the car, and it would be impossible to cover all of them. But I’ll notice a few of my favorites. For starters, there are eight USB-C ports, inside the car, six of which are located at the front, and two of which at the back for the passengers. The car also boasts accent lighting throughout, and it can be customized to your preference. And, the faux leather used on the seats is soft, breathable, and luxurious. It also hides both heating and cooling, and a massage function, if you get the most expensive Pinnacle trim (which we recommend). With the nice pillowy headrests, you won’t want to get out at your destination. You can even store your preferences as presets, that are activated through your fingerprint.

The car also boasts a ton of storage at the back. The trunk is long, and offered more than enough storage for my fiancée and I to travel to her parents for Christmas. That included a medium-sized suitcase, some bedding, and a whole lot of gifts. Under the cover of the trunk, you’ll find a home charging cable, so you can trickle-charge overnight if and when needed.

Mercedes could have simple slapped one of its existing cars on an electric platform, but instead, it took the opportunity to completely redesign the dashboard. The Hyperscreen is actually a collection of three displays rather than one big one, and comes with Mercedes’ MBUX infotainment system.

There’s one display that serves as an instrument cluster, one main screen in the middle for infotainment, and a third screen in front of the passenger, which allows the passenger to do things like watch videos, play games, and more. It even has a built-in web browser, though you’ll need to ensure that you have a data package with the car to actually use it.

Generally, I found the infotainment system to be relatively easy to use. It supports Android Auto and CarPlay through a wireless connection, so you can stick with your preferred apps and services if you so choose. If you don’t mind using the built-in interface, you’ll find a mapping system that’s better than most built-in ones.

The user interface in general isn’t bad, but as is usually the case, it’s not amazingly designed. You’ll get used to the overall look and feel of it, and thankfully, the displays are relatively responsive, at least after the car has been on for a minute. Every now and then, you may find yourself waiting for a second or two for the display to respond to your touch, which can be annoying. But generally, I found MBUX to work relatively well.

There’s a heads-up display on offer here too, and it works very well. The car can pull mapping information from CarPlay, and show directions on the heads-up display. But, if you use the car’s built-in mapping, you’ll get actual augmented reality arrows over the road as you’re driving. It’s a super cool feature, but it does take some getting used to. The HUD also shows your speed, speed limit, and more.

For starters, the car does offer a dynamic cruise control, which lets you adjust how close or far you want to be from the car in front of you. And, it has a lane-keeping technology that keeps it centered in the lane. On the highway, these two features add up to what’s essentially a self-driving feature.

The cameras on the car work to build a 360-degree view of the car when you’re parking or pulling out of a spot, and they look excellent. I found that I relied much more on the cameras than I do on many other cars, and the 360-degree view really helps ensure you’re not getting to close to anything around the car, even if it’s on the side.

The Mercedes EQS450+ offers an electric motor that can generate 329 horsepower. You’ll get acceleration from 0-60 in 5.5 seconds with this variant, or 4.1 seconds if you go for the all-wheel-drive EQS580. The car has an adaptive air suspension, and a rear-axle steering system that can angle the rear wheel to up to 4.5 degrees with the base model, or 10 degrees with an upgrade, helping make the relatively large car easy to maneuver.

Generally, the car felt both extremely responsive, and very floaty. At times, it felt a little too floaty for my preferences, but that’s nitpicking — I loved the overall feel of the car.

The EQS450+ is capable of up to 350 miles of range, and can charge from 10 to 80 percent in around 35 minutes on a DC fast charger. But without the Tesla Supercharger network, you’ll be relying on a sub-par infrastructure, at least in the U.S. If you have decent DC fast chargers near you, like those from Electrify America, then you might be fine — but otherwise it’s worth making sure you can charge at home or work.

The Mercedes EQS450+ is an incredibly luxurious car, with a high electric range, and all the bells and whistles you would want in a high-end car in 2022. It’s hard to say if it’s better than the Model S, but it certainly feels more luxurious when you’re in it. The only downside? It doesn’t yet have access to Tesla’s incredible charging network.

But if you’re confident in being able to keep the car charged up, you’ll absolutely love the overall driving experience of the Mercedes EQS.

The high-end EV space is getting increasingly competitive. The incumbent is the Tesla Model S, which still benefits from a larger charging network. But it’s not as luxurious as the EQS. Another contender is the Porsche Taycan, which is smaller and has a lower range. Ultimately, in this price range, we recommend the Tesla Model S for those worried about charging, and the Mercedes EQS for those who want the most luxurious drive.

Yes. If you have money to burn and want an extremely luxurious EV, this is the way to go.