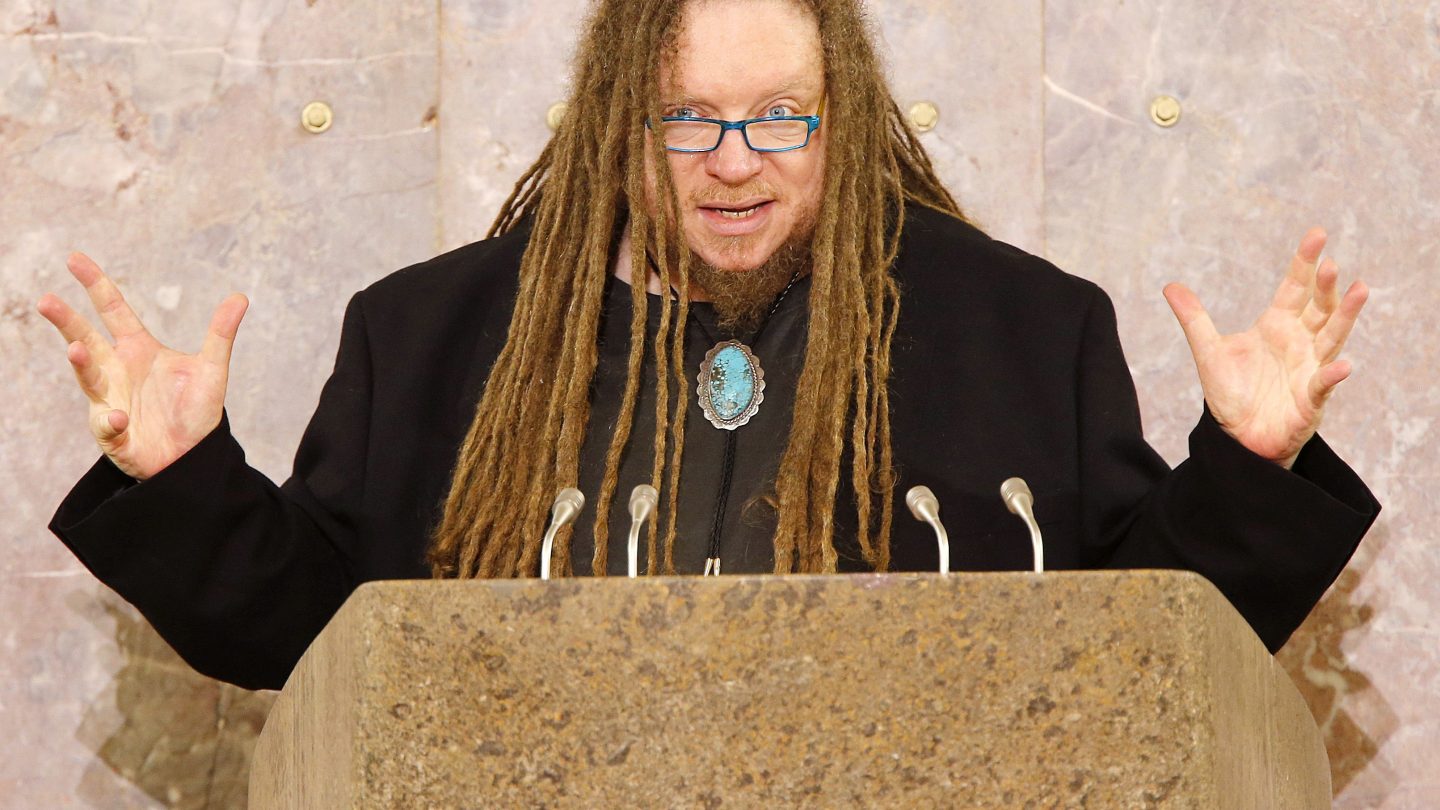 The London Evening Standard has called him the David Foster Wallace of tech. But it’s not because Jaron Lanier is such a distinctive presence, with his beard and dreadlocks and sing- songy voice; it’s because of how differently he sees the world from the rest of us. Jaron is someone who’s avoided social media — indeed, who warns about his dark side — and who’s credited with helping popularize the term virtual reality. He lived as a kid with his father in a geodesic dome, went to college at 14, and founded the first company to sell VR products.

His new book, “Dawn of the New Everything,” is simultaneously a love letter to tech and to the world that’s enthralled him since his childhood, but also a prescient cautionary note against the darker angels in our nature that can bend these devices and products to unkind ends.

In an interview about the book with BGR, Lanier — who today works with Microsoft Research — laments the effects of social media in much the same way as did former Facebook exec Chamath Palihapitiya in recent days. (Chamath, you’ll recall, is the tech personality who made headlines for suggesting that social media is tearing society apart.)

“What I think happened with social media is that it started by funding itself with advertising,” Lanier says. “But the problem is that as the computers got better and algorithms got better, it stopped being advertising and it turned into something much more dangerous. Which was behavior modification through feedback. In other words, what’s going on now is whenever you post something or even move anywhere or meet somebody or do anything, that information is gathered and fed to algorithms that control what information is fed to you next.

“When you are directly measuring what somebody does by giving them feedback, one thing is you can create something that’s addictive in the same way gambling is addictive. We’ve been conditioning large numbers of people to become kind of mean and reactive, because it’s cheaper and easier to condition people with negative emotions than positive ones. So we’ve made these waves of rage online.”

He’s been thinking about such things, about how we weave tech and digital products into our lives, for a long time. Lanier’s 1980s startup VPL Research created the first commercial VR products, introducing things like avatars along with prototypes of VR applications like surgical simulations.

Back then, he was much more idealistic in his work and in his writing about tech (he’s written two other books besides his latest). “Dawn of the New Everything” is something of a reaction to his more idealistic self. A reaction to when he admits to being a more “positive, almost idealistic and even utopian” promoter of all things digital.

Much of his work today as a researcher is interconnected. He’s also been putting a lot of effort lately, for example, into economics. “I’ve been interested in an alternate online economy, where people can make a living by what they do online. The shortest way to put it is if we’re really going to put all these people out of work because robots will drive the cars and trucks, we need those people to be able to make a living in some other way.

“You can’t put the whole society on welfare. And I think one of the great tragedies of our time, for example, is we unfunded journalism just when we needed it the most.”

There’s a bit of that old idealism again. The notion that things have to change, that advertising and a race for clicks and so many other digital encumbrances that don’t make the world better have barnacled themselves on to so many business models. And he wants to see if there’s a new economics that can help do something about that.

His comment about future societies also makes reference to robots and an allusion to artificial intelligence, which is something he disagrees with other experts like Elon Musk about. Elon is worried about some evil super-intelligence manifesting itself in the future; Jaron doesn’t think AI, as such, even exists at all.

“If you write a program – a computer program that’s good at doing something, maybe it’s good at telling cats from dogs in pictures — you really have a choice in how you think about that program,” Jaron says. “You can say, I’ve written a program that does this thing. Or you can say, I am creating a new being that’s like me, a new lifeform.”

All of that neatly sets up his current thinking about virtual reality. On the one hand, he’s excited by its promise. He’s also fearful of its darker implications, using social media as a guide.

He rejects the conventional wisdom that VR is a niche thing with modest popularity by looking only at the number of headsets that have been sold. While there are millions on the market, versus hundreds of millions of smartphones, he argues this is about how fast smartphones and tablets also got started.

Which is not to say he thinks the conversation around how to use or popularize VR couldn’t do with some tweaking. He goes so far as to argue that some of the ways people are being asked to use VR doesn’t make sense.

“There’s a certain kind of thing you can do with both video games and, like, movies or TV where it really does make sense,” he says. “If you’re just kinda spacing out and you’re by yourself and you want to watch something on Netflix or play a video game, that kind of works. But putting on a headset and going into a virtual world just by yourself in your apartment — there’s something about it that feels a little lonely. There’s something about it that doesn’t quite work. I really think the natural state for VR is more about connecting with people. It’s much closer to a surreal version of Skype than it is a 3D version of Netflix, you know?