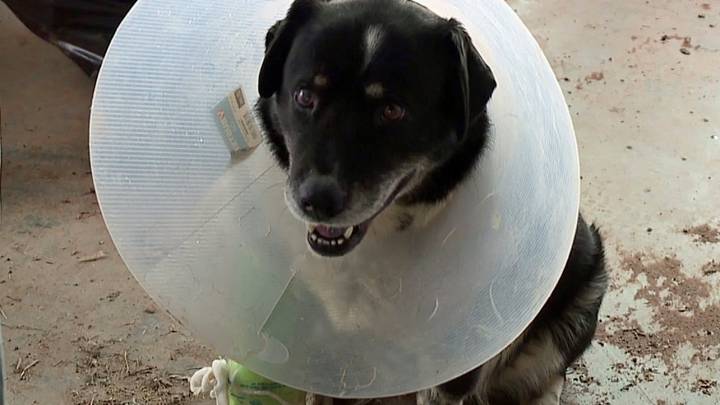 If you’ve ever seen a dog’s eyes light up when you say the word “walk,” you know that man’s best friend is pretty keen on getting out and seeing the world. Duke, a lab mix from Davis County, North Carolina, got a chance to see his neighborhood in a way that few dogs ever achieve — and even fewer live to remember. The incredibly lucky pup was swept up by a tornado when it tore through his town, carried up and away from his home and tossed a whopping 1,000 feet. He survived.

When the storm eventually passed, Duke was found in a field roughly 1,000 feet from his home. He didn’t make it through unscathed, and had a broken leg and damage to one eye from the encounter with the twister, but he was still alive.

“[Duke was] picked up in the mass of the swirling wind,” Lewis Vannoy, Duke’s owner, explained to a local CNN affiliate. “Tossed just like a rag doll.”

Duke, at 12 years old, isn’t a young fellow, but he’s still expected to make a complete recovery from his injuries. He requires surgery to fully repair the damage the twister wrought, but he’s lived to tell the tale.

The tornado was classified as an EF-1, which is the second lowest tier on the scale, based on the amount of damage it inflicts. No casualties were reported, though the funnel’s 110 mph winds did destroy several homes and damage a local fire department. Minor injuries were reported.