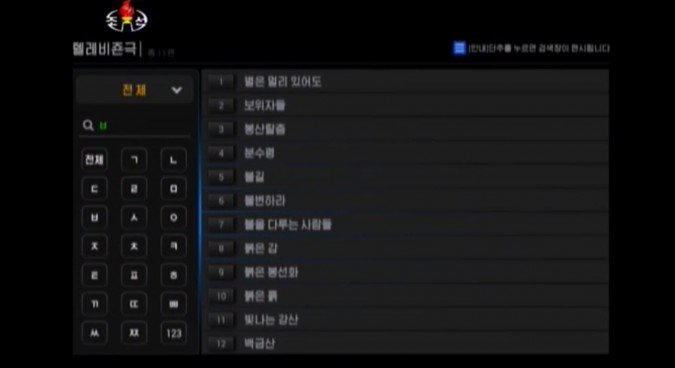 Netflix is committed to supplying a never-ending stream of Western entertainment straight into the eyeballs of the populace. North Korea is committed to none of those things. So it’s a bit of a mystery why North Korea has built a Netflix clone, but I sure am glad that there’s photos of it.

North Korea News has the scoop on “Manbang” (no, really), the North Korean set-top box service that is supposed to rival Netflix. It offers the ability to watch five channels in real time, browse TV by category, and view information about the Glorious Leader. Manbang and chill? Sounds about right.

According to the somewhat sketchy details pulled off a North Korean TV station, Manbang is a TV-over-internet device (IPTV). A set-top box that looks a lot like a router plugs into a TV and the internet, and offers streaming and on-demand capabilities.

The interfaces do look a little dated: it seems that you use the TV remote to search for things, and all the menus are black-on-black. It looks similar to the level of functionality from a smart TV in 2009, which is to say it’s not all that useful.

UI aside though, proper IPTV is a big capability increase for North Korea, which has previously been lacking in the high-tech department. Now, if they could just fix the name and organize a worldwide release, Netflix might have some competition.