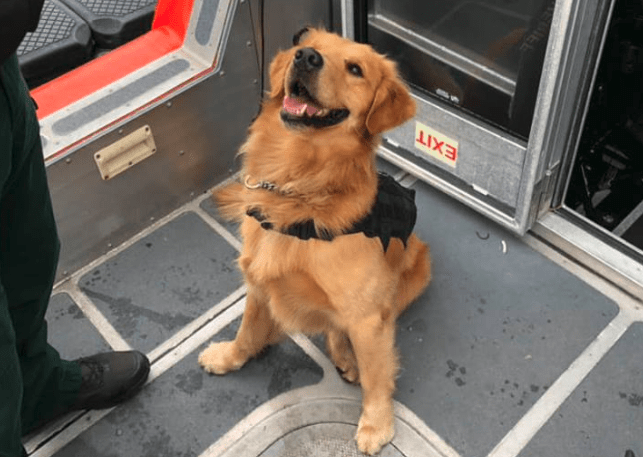 Jake is a beloved member of the Brevard County Sheriff’s Office in Florida, where he regularly walks his beat sniffing for drugs. It’s the perfect job for a 3-year-old golden retriever, though a few days ago, “Jake” actually had a too-close brush with the effects of the narcotics he’s screening for. Specifically, ecstasy, which our canine gumshoe accidentally snorted while screening passengers last week at Port Canaveral as they boarded the Norwegian Epic.

Passengers onboard the 4,100-person ship were getting ready to disembark as part of the next leg of the annual Holy Ship! EDM festival. A sheriff’s office spokesman told Orlando’s WFTV news station that as Jake was conducting his search, he “started having some problems with balance and had some type of seizure incident of some sort.” Another local news station, WKMG News, reported that a Leslie Bennett of Montana was standing in line when Jake signaled that he’d picked up the scent of suspected drugs. And that’s when Jake started to freak out.

He seemed ill all of a sudden. He reportedly had trouble keeping his balance and even experienced a kind of seizure.

Authorities figured he’d definitely inhaled something. Sheriff’s office spokesman Tod Goodyear told WFTV that Jake was give some anti-overdose medication (Narcan) and whisked away to the vet. He quickly recovered, fortunately, and doesn’t appear to have sustained any long-term damage.

Bennett, meanwhile, was reportedly detained. Authorities found a bag of ecstasy and other narcotics while searching her in a screening area. A search of her luggage turned up even more drugs. In all, about a dozen people were arrested who’d tried to board the party cruise.

Meanwhile, Jake is back on the beat. Port Canaveral officials tweeted this clip of him back on duty, a perfectly healthy good boy who’s once again here to protect and serve:

K9 JAKE’S BACK ON THE BEAT: @BrevardSheriff's K9 Deputy Jake is back on duty at Port Canaveral, playing with his handler, Deputy Scott Stewart, and showing no ill effects from a severe reaction that the 3-year-old golden retriever suffered from finding drugs on a passenger. pic.twitter.com/5cdFHlNlEp