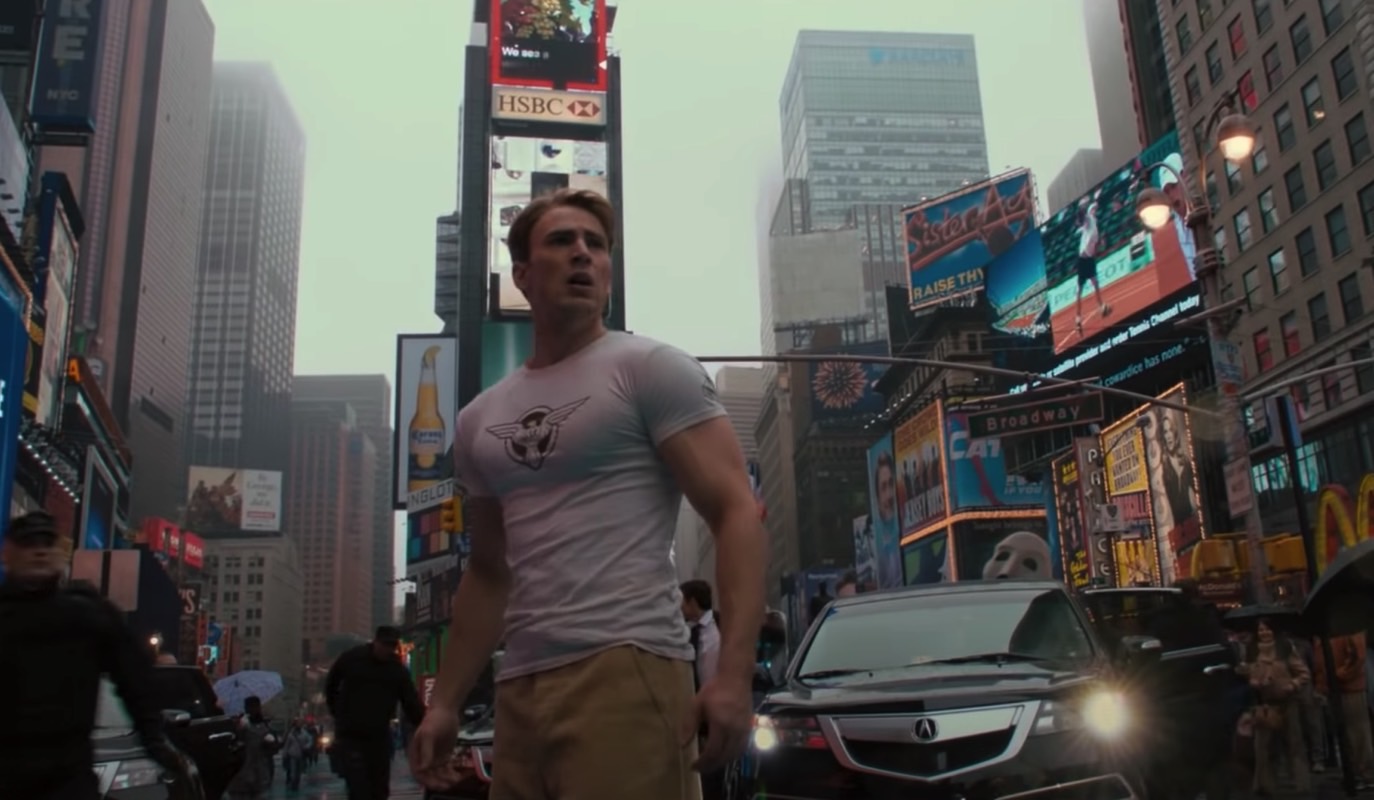 The image above comes from an iconic scene in an iconic movie, and it’s one that sets up an iconic Marvel character. MCU fans have already recognized Chris Evans playing his Captain America role, and they probably know what scene this is. Spoiler alert, it comes from the ending of the first Captain America film, showing the moment when Steve Rogers discovers the modern world around him, after having been frozen in ice for nearly 70 years. That’s all that scene was intended to offer us until the novel coronavirus pandemic appeared. We’re now more than 6 months into the outbreak, with the virus infecting more people than ever right now. Conspiracy theories have flourished during this time, and the latest one uses the screengrab above to spread misinformation. Look at it again, what do you see?

Near Cap’s right shoulder, there’s a billboard of a popular beer that needs no introduction. In fact, some people thought earlier his year that Corona beer was somehow related to the coronavirus.

The coronavirus got its name because of its appearance. The virus looks like a sphere with spikes coming out of it just like a crown. “Corona” comes from Latin and means crown. The irony doesn’t escape us; SARS-CoV-2 is indeed the king of all viruses right now.

That brings us back to the image above. If you can spot a graphic on another billboard that looks like a coronavirus near Cap’s left shoulder, then you’re not alone. But hopefully, you’re not going to believe the dumb coronavirus conspiracy theory that says The First Avenger predicted the coronavirus pandemic. Marvel does plant all sorts of clever Easter eggs in its movies, and it can take years for them to be truly appreciated. We’ll give you that. But the first Captain America movie did not forewarn us of the current health crisis. That idea is just plain stupid.

Some people will tell you otherwise, though. Just check the tweet below:

A friend who’s fully into the covid conspiracies sent me this post that says Captain America predicted the coronavirus outbreak in 2011, and while its obviously bs, I started fixating on that circled image on the right. pic.twitter.com/N4XywDTZEx

Mullally is a film critic at The Cutaway, and he went on digging for information. The bootle of Corona doesn’t need any explanations, because it’s clearly a bottle of Corona. But what’s that spikey sphere?

He discovered that the scene was shot in New York on April 23rd, 2011, per MCUCosmic. He then tracked the “coronavirus” ad using YouTube and street view maps of Times Square for that period. It turns out the spikes aren’t connected to a sphere at all. They’re spaghetti:

We recognized the logo and the color scheme. We cracked the case. pic.twitter.com/VeOKPdxZNE

That’s equal parts hilarious and sad. People are more likely to spread fake news, including conspiracy theories, rather than real news. It’s unclear how this one started or whether the first person who spotted it was being serious. But some people might end up falling for it.

If you’ve never seen Captain America: The First Avenger, you should check it out. It’s actually the first MCU film you want to see to experience the Infinity Saga in chronological order.

As for the true coronavirus origin story, that’s something we’re still waiting for. The scientific and intelligence communities widely agree the virus evolved naturally in animals before jumping to humans, but China has yet to tell the world where COVID-19 first emerged.