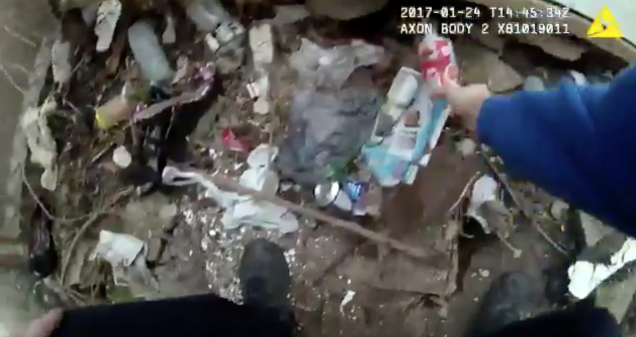 Baltimore news outlets have published body cam video from a supposed drug bust back in January. The video appears to show a cop planting drugs in a trash pile, before going back to the road, activating his body camera, and “finding” the drugs that supposedly belonged to a suspect.

The cop was using a model of body cam that constantly captures and buffers footage, so that when you press the record button, it saves the previous 30 seconds of footage.

Footage shows officer placing drugs in trash; goes out to street, turns on camera, returns. Cams save 30 sec prior to activation, w/o sound pic.twitter.com/5ZW128lWFM

Presumably unaware of this feature, the cop accidentally films himself placing a baggie of pills in an empty can in a yard filled with trash. The officer then goes back out to the sidewalk with two other cops, presses record on the body cam, and is then heard saying “Hey, let’s check over here.”

The officer is seen “discovering” the bag of pills in record time, before coming back out to the road and turning the camera off. The drugs — and the officer’s testimony of finding them — were to be used in a case against a suspect. After reviewing the video, a public defender brought up the apparent planting of evidence to the prosecutor in the case. Charges were subsequently dropped, and some kind of investigation is ongoing, although the Baltimore Police Department has refused further comment.

Body cams have become more and more prevalent among cops in recent years, although policies around when they should be recorded and how evidence should be disclosed are still working out. Cases like this show how some police officers appear to be manipulating the cameras (however badly!) to try and manipulate evidence, showing that they’re far from the perfect solution that some have hoped for.