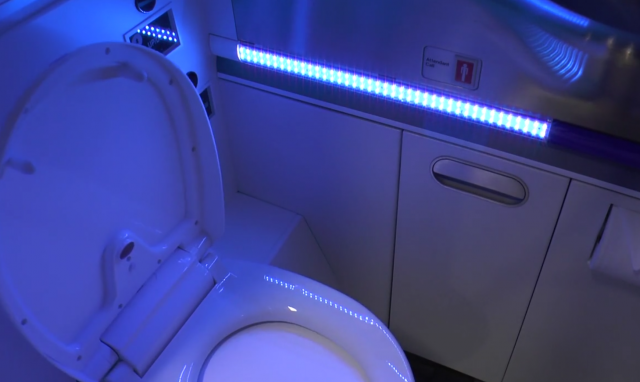 For years, I’ve longed to have a bathroom capable of cleaning itself and now it looks like Boeing is going to bring my dreams to life. Truly, we live in an age of wonders.

Boeing this week took the wraps off a new a prototype airplane bathroom that uses ultraviolet light to kill over 99% of pathogens and thus make surface areas as good as sanitary.

FROM EARLIER: Goodyear unveils a wild concept for spherical tires

When the bathroom needs to be cleaned after it’s been used, it turns on several far UV lights that are powerful enough to kill germs but that shouldn’t be harmful to people. Even so, you’d still want to clean the bathroom during flights when the bathroom doors are closed to minimize people’s exposure to the ultraviolet beams.

“The UV light destroys all known microbes by literally making them explode,” explains Jamie Childress, an engineer for Boeing Research and Technology. “It matches the resonant frequency of the molecular bonds on the outside of the microbes.”

Fellow Boeing Research and Technology engineer Teresa King notes that this system could even eliminate unpleasant odors that come from bacteria generated during normal bathroom use.

Boeing isn’t content to just zap bacteria with ultraviolet light, however. It’s also working to minimize the number of surfaces you touch while in airplane bathrooms by including hands-free faucets, soap dispensers, trash flaps, toilet lids and seats.

While it might be a while before we see this technology used in actual airplanes, this is also the most forward-thinking evolution in bathroom technology and public sanitation that I’ve seen in a long time. Learn more about it at this link.