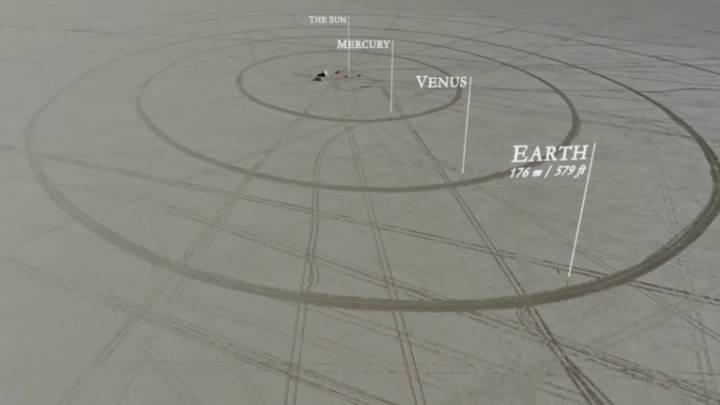 Remember that Solar System school project you may have built when you were a kid? Remember how crammed together the planets orbiting the sun were? Well, you couldn’t have made it any other way – say, to actual scale – unless you had some seven miles of space at your disposal.

But that’s exactly what Wylie Overstreet and Alex Gorosh did. The duo figured out they needed at least seven miles of quiet space to actually build a proper Solar System model and they chose a desert for the project.

Overstreet and Gorosh went to Nevada where they built their Solar System to a scale of 1 astronomical unit (distance from Sun to Earth) of 176 meters. From there, they mapped the entire system all the way to Pluto, recording mesmerizing time-lapse video of the planets, their movement and their orbits respective to the sun.

Unsurprisingly, Earth is about as big as a marble. Looking from that marble in the dust through the lens of the camera at the model sun, you’ll see a star mockup that’s exactly of the same size as the real sun seen from Earth – this proves the math behind the project is right.

Called To Scale: The Solar System, the short video below will show you exactly how they did it.