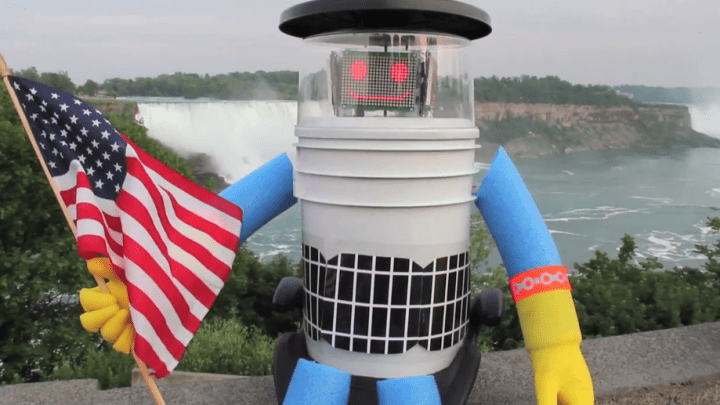 Sorry, hitchBOT: It looks like you weren’t ready for the U.S.A. after all. hitchBOT, in case you don’t know, was a hitchhiking robot that successfully made its way across Canada, Germany and the Netherlands all thanks to the kindness of strangers who picked it up on the side of the road and took it to various destinations. You may notice we said the robot was a hitchhiker. That’s because the friendly hunk of metal only lasted two weeks hitchhiking in the United States before it was found brutally decapitated and dismembered in Philadelphia.

“hitchBOT’s trip came to an end last night in Philadelphia after having spent a little over two weeks hitchhiking and visiting sites in Boston, Salem, Gloucester, Marblehead, and New York City,” hitchBOT’s developers announced over the weekend. “Unfortunately, hitchBOT was vandalized overnight in Philadelphia; sometimes bad things happen to good robots.  We know that many of hitchBOT’s fans will be disappointed, but we want them to be assured that this great experiment is not over. For now we will focus on the question ‘what can be learned from this?'”

The biggest thing to be learned from this is you should probably avoid Philadelphia next time. This is the city that once booed Santa Claus during an Eagles game, so it’s not surprising that it wasn’t very friendly toward chatty robots. Yes, it’s the home of the Liberty Bell and all that, but it’s definitely not the City of Brotherly Love that its nickname would suggest.

CBC journalist Lauren O’Neill posted a picture of the destroyed hitchBOT, which was found missing its head and with its arms ripped off.

Nicely done, Philly. You’ve now ensured that future editions of hitchBOT will come fully armed with concealed laser pistols that it can use in case it’s endangered when traveling through America. This is why we cannot have nice things.