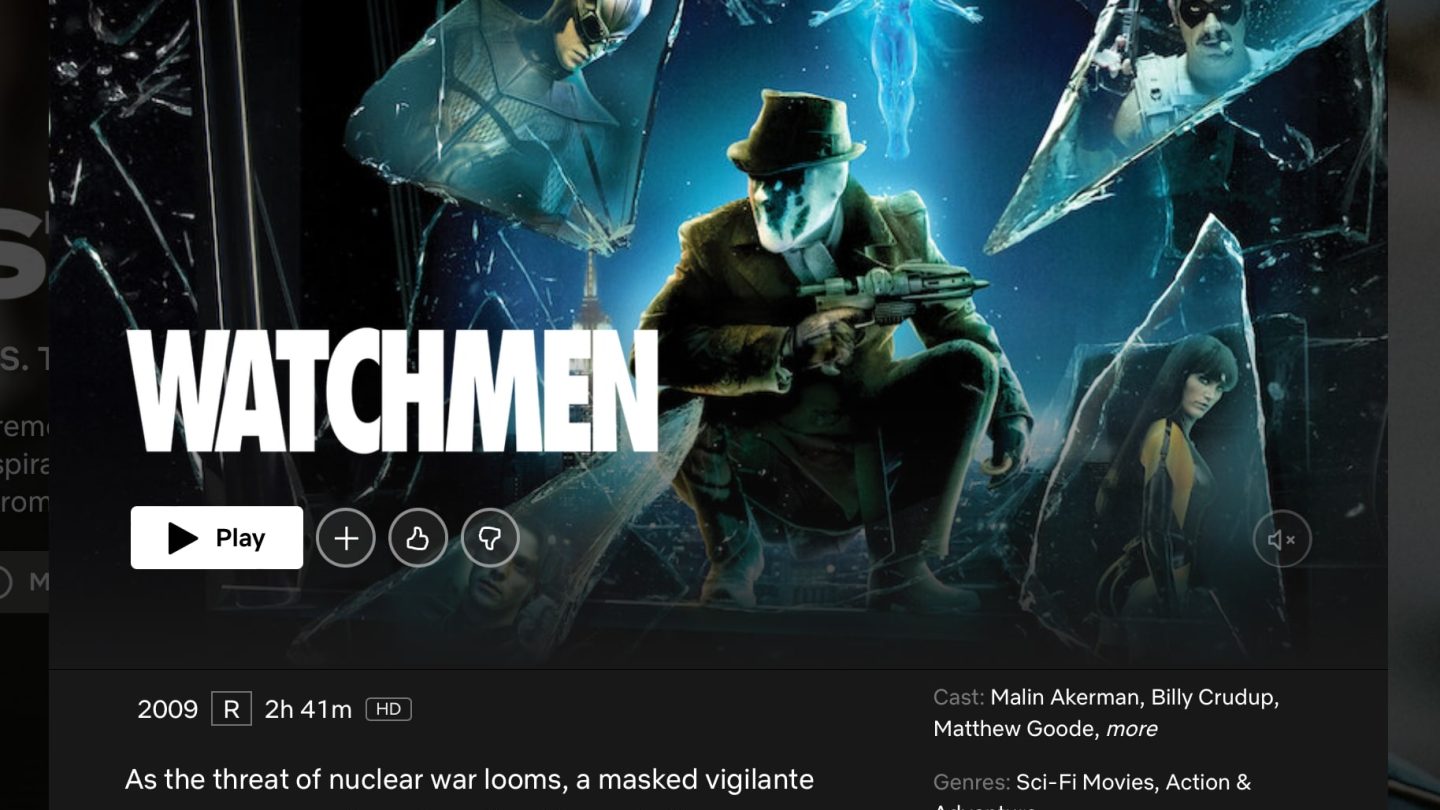 Zack Snyder has a pretty loyal audience of fans who flock to almost anything the director — noted for his flashy, kinetic visual style — puts out. That includes some big projects for Netflix, like last year’s Army of the Dead and its prequel, Army of Thieves. Both of which, while they’re not going down in history as truly great cinema anytime soon, were nevertheless insanely fun. An assessment that the rest of Snyder’s catalog doesn’t always enjoy, with 2009’s Watchmen being one example.

We should add, speaking of Snyder’s Netflix titles above? He’s also working on Rebel Moon, a sci-fi movie that will no doubt be another big, brash addition to the Snyderverse, one that — fun fact — he’d originally apparently considered as a Star Wars movie. We’ll have more to say about that one in a moment. But, while you wait for Rebel Moon to hit Netflix? There’s still plenty more Snyder content on the streamer to keep you entertained.

Like Watchmen, based on a graphic novel with a cult following, which debuted on Netflix just a few weeks ago. In case you never caught this one the first time around, for whatever reason, here’s the basic summary from Netflix. “As the threat of nuclear war looms, a masked vigilante uncovers a conspiracy targeting him and other superheroes after a former teammate is murdered.”

The cast includes Billy Crudup, Malin Akerman, Jackie Earle Haley, Patrick Wilson, and Jeffrey Dean Morgan. Over at Rotten Tomatoes, it currently has a fairly strong audience score of 71 percent. That’s based on more than a quarter of a million reviews.

As for the critics’ score on the review aggregation site, that stands at just 65 percent. And it’s based on 310 reviews, such as this one from Salon.com: “When given a great story and told that his job is to simply adapt it, Snyder more than rises to the occasion.” As with any Snyder project, though, there are plenty of detractors for this one, too. Some of whom don’t think the title holds up all these years later.

Watchmen, at least for me, is one of those annoyingly long movies — with a runtime clocking in at almost 3 hours. I’ve already seen it once, too, so I don’t know that I’ll be checking it out again on Netflix.

However, I’m definitely pumped at this point for Rebel Moon once it finally arrives on the streamer. Netflix doesn’t have any images or trailers to share quite yet. But here’s the logline for the movie:

When a peaceful colony on the edge of the galaxy finds itself threatened by the armies of the tyrannical Regent Balisarius, they dispatch a young woman with a mysterious past to seek out warriors from neighboring planets to help them take a stand.

“This is me growing up as an Akira Kurosawa fan, a Star Wars fan,” Snyder told The Hollywood Reporter about this forthcoming movie recently. “It’s my love of sci-fi and a giant adventure. My hope is that this also becomes a massive IP and a universe that can be built out.”

Meantime, Snyder fans should also see if you agree with this rundown of the director’s best movies, ranked by order of preference. I definitely agree with that ranking’s #1 by the way — putting 300 at the top of the list of Snyder’s best. It, too, is available to stream on Netflix, by the way.