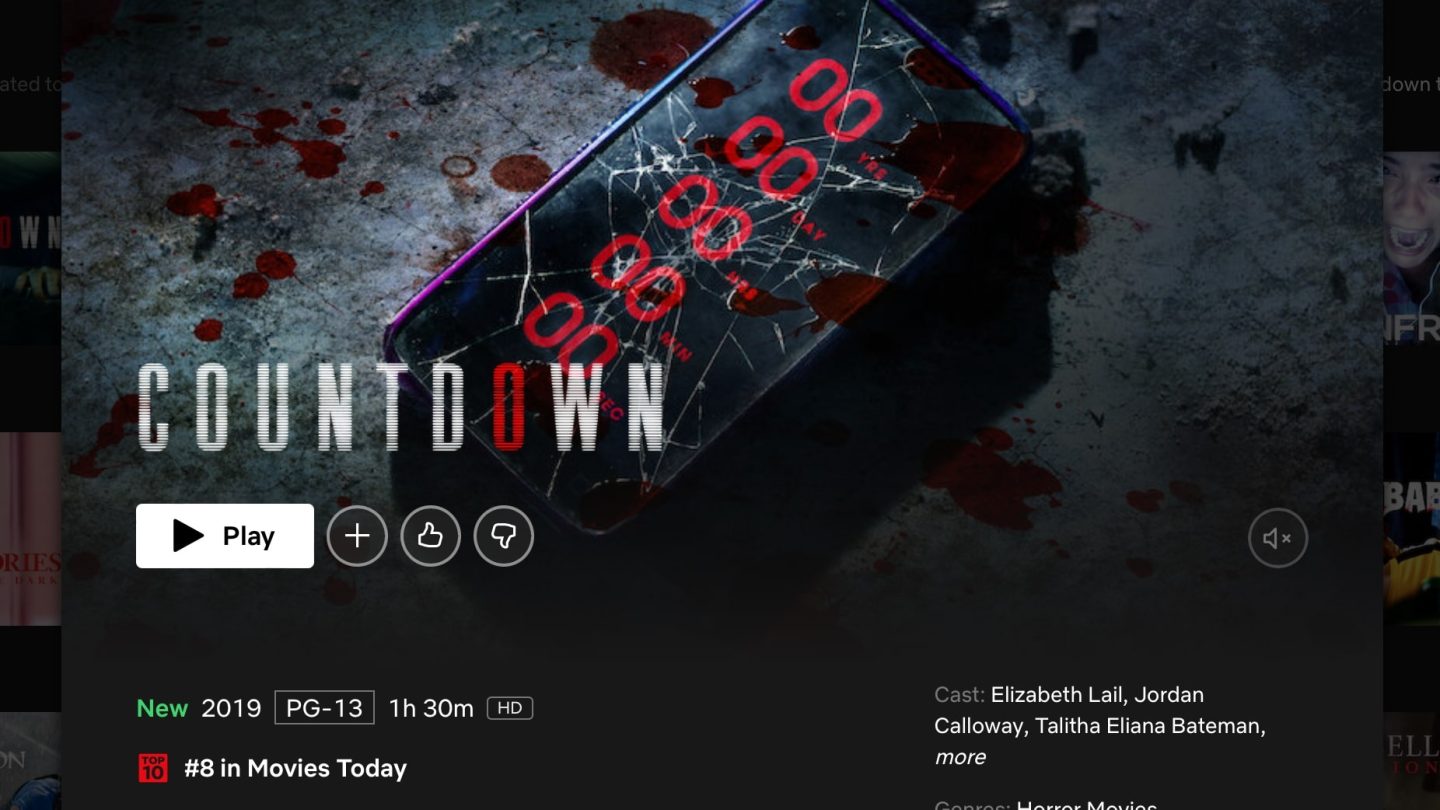 Elizabeth Lail is a familiar face to Netflix subscribers, thanks to her role in one of the biggest series the streamer has ever released: The psychological thriller You, based on a series of popular books. However, don’t be surprised to scroll through your Netflix app and stumble across her name and likeness connected to another top-tanked title. It’s called Countdown, and it’s one of the most-watched horror movies on Netflix. In fact, it’s one of the service’s most-watched movies, period, for the time being.

This film hit theaters back in the fall of 2019. And it’s currently the #8 movie on Netflix in the US. We’ve got all the details below, including a description and trailer. Plus more top-ranked horror movies on Netflix to check out when you’re done with Countdown.

The Netflix synopsis for this movie is as follows. A nurse downloads an app that predicts the user’s exact time of death. At which point, “she discovers she has three days to beat the clock and change her fate.”

The film, unfortunately, didn’t get particularly great reviews. But Countdown, written and directed by Justin Dec, at least got a nice consolation prize: A worldwide gross of $48 million, against a budget of less than $7 million.

Audiences gave the movie a somewhat decent rating of 72 percent on Rotten Tomatoes, based on more than 1,000 verified ratings. However, the film currently has an abysmal 26 percent score on the review aggregation site. That score is based on 70 critics’ reviews.

An interesting side note about this movie: Developer Ryan Boyling built a companion Countdown app. It’s available on both iOS and Android. If, you know, you have a morbid curiosity and want to play along, as it were. The app is a random death generator, and at one point it shot all the way up to #1 on the App Store.

Meanwhile, after you finish with Countdown? You might be looking for the next terrifying horror thriller to check out on Netflix. If that’s the case, you can peruse some of our recent coverage (here and here, for example) to get some ideas for what else to stream.

#1: His House (2020) — Rotten Tomatoes synopsis: “A refugee couple makes a harrowing escape from war-torn South Sudan, but then they struggle to adjust to their new life in an English town that has an evil lurking beneath the surface.”

#2 Creep 2 — Synopsis: “A video artist quickly realizes she has made a mistake when she meets a serial killer in a cabin.”

#3: Under the Shadow (2016) — Synopsis: “After Shideh’s building is hit by a missile during the Iran-Iraq War, a superstitious neighbor suggests that the missile was cursed and might be carrying malevolent Middle-Eastern spirits.”