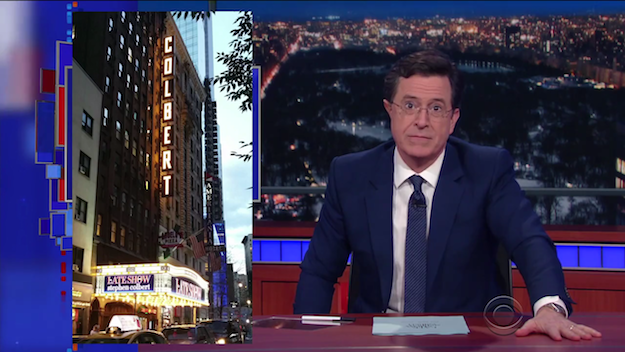 Five days removed from one of the strangest primary debates in modern history, Stephen Colbert finally had a chance to respond to Republican frontrunner Donald Trump’s somewhat shocking remarks about the size of his… “hands.” I saw somewhat because, honestly, at this point, it’s really tough for Trump to surprise us.

After showing his audience a clip of Trump’s response to Marco Rubio’s burn about the size of his hands, Colbert immediately failed to get his next line out and broke into a fit of laughter. Once Colbert recovered, he proceeded to prattle of a list of innuendos, each better than the last: “executive branch,” “long form,” “Lincoln log,” etc.

Check out the full video from The Late Show below:

There are two elements of this incident that make it one of the more incredible of the primary season. First, it might have one of the longest shelf lives of any bizarre sound bite of the election cycle. Even if Trump can’t secure the nomination, you’d better believe we won’t be forgetting this moment any time soon.

Second, and perhaps more importantly, is the fact that we probably haven’t reached peak Trump yet. As Colbert notes, we still haven’t hit the lowest of lows: “onstage nut punch followed by closing statement delivered via one long burp.”