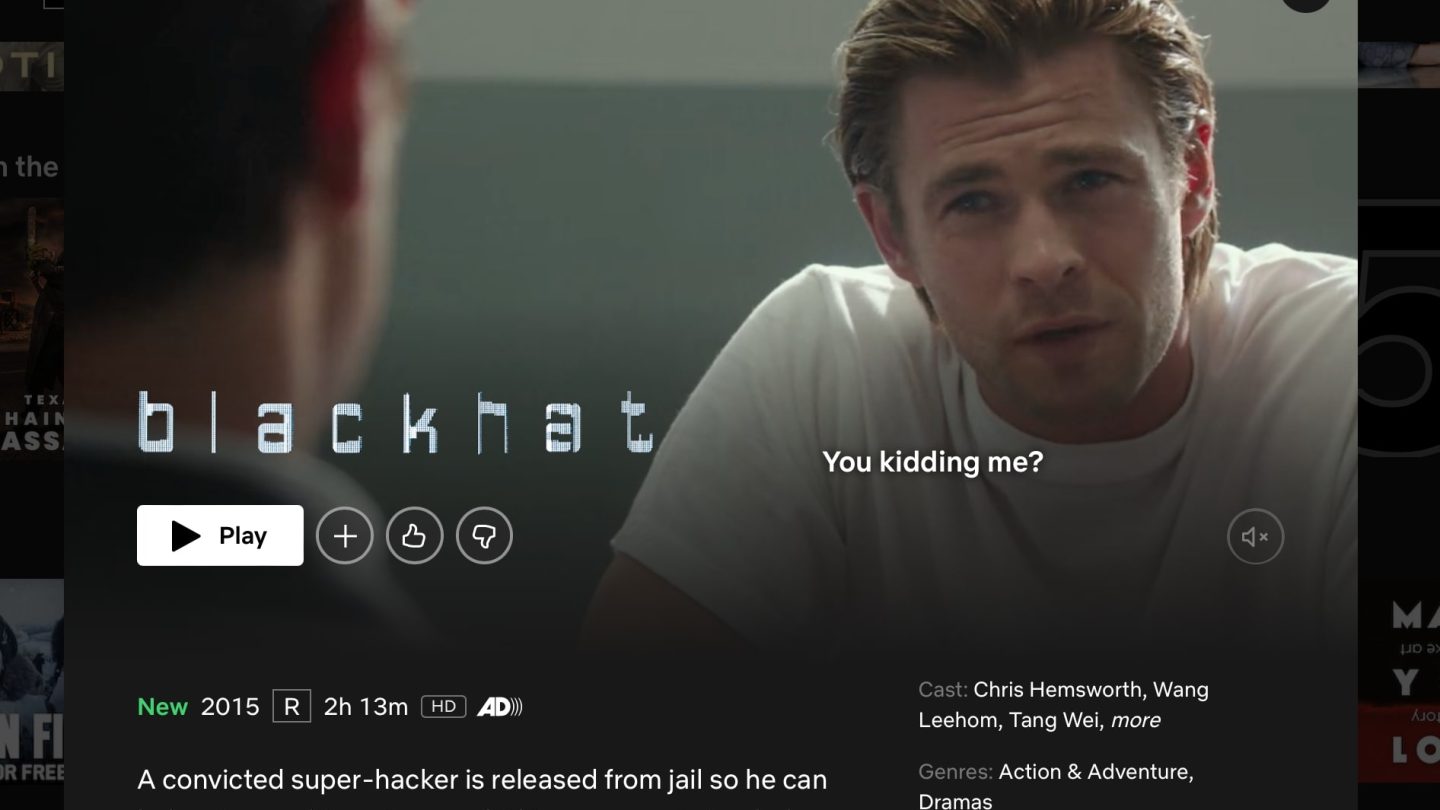 Chris Hemsworth in recent years has evolved into a fan-favorite hero in the Marvel Cinematic Universe, thanks to his turn as the God of Thunder in three Thor movies so far. With a fourth, Thor: Love and Thunder, coming in just a few months’ time. But that doesn’t mean even one of the most bankable stars in Hollywood is immune from the odd stinker or two. In fact, one such example from Hemsworth — the widely planned Blackhat — also happens to be one of the top Netflix movies in the US at the moment.

The plot for this title from 2015 is nothing new. “A convicted super-hacker is released from jail so he can help a team of American and Chinese experts track down a cyberterrorist,” reads the official Netflix summary. Never mind, of course, that American and Chinese experts teaming up to fight a cyberthreat sounds about as believable as a god who wields a hammer and controls thunder. And “super-hacker” seems like a term that only exists in the movies.

Blackhat, one of the top streaming movies in the US

Maybe that’s part of the reason why critics and viewers have ripped this movie to shreds (never mind that it’s #4 in the US today on Netflix).

Over at Rotten Tomatoes, Blackhat currently has an abysmal 32 percent critics’ score. That’s based on 191 reviews, like this one from the UK Observer: “A square-jawed, furrowed-browed, altogether joyless film, with a hero to match.” A different UK reviewer had this even harsher take: “It’s not very good. Some of it, in fact, is downright awful.”

Viewers, meanwhile, have been even more unkind to the movie, which also stars Wang Leehom, Tang Wei, and Viola Davis.

Based on more than 10,000 Rotten Tomatoes ratings at the moment, Blackhat has a god-awful 24 percent audience score. With some of the most recent takes from viewers including:

As we said, meanwhile, Blackhat is currently one of the top movies on Netflix in the US at the moment. The full list of the Netflix Top 10 movies for Tuesday, February 22, is available to peruse below — where you’ll find links to the titles, as well as to some of our recent coverage.

Among other things, The Tinder Swindler is still holding strong, as you’ll see below. While among the newest additions to the list is Netflix’s documentary about Boeing, which has gotten pretty strong reviews so far.