If you asked most Americans for a list of activities they’ve been doing the most often during the coronavirus pandemic so far, in this strange time of quarantines and social distancing, no question that streaming TV shows will be at or near the top of the list.

Despite scores of temporary production shutdowns, streamers like Netflix are still adding new series at a pretty regular clip, which is why among the most-watched TV shows on Netflix right now are series that it’s just added, like Sweet Magnolias (as well as new seasons of existing shows, like the just-added sophomore season of Dead To Me). Meanwhile, plenty of people are gravitating to old favorites as well, like Friends and The Office, as a new survey by CableTV.com of the most popular shows during the coronavirus pandemic reveals.

The survey, which asked around 7,000 “housebound viewers” what they’re watching the most right now, identified the most popular TV show during the pandemic for all 50 states — with some results that might surprise you.

For example, the show listed as the most popular in the most number of states isn’t a new series. It’s actually Friends, which rolled off of Netflix this year to join the lineup of HBO Max, a new streamer from WarnerMedia launching on Wednesday.

Another surprising tidbit from the CableTV.com survey (at least to me) — while there were several TV shows that actually debuted during the pandemic, and one particular Netflix show about a colorful, gun-toting exotic animal showman comes to mind, none of them rated highly enough to top the list of most-watched shows in a particular state. These new series that nevertheless did at least show up in the polling results to one degree or another included Tiger King, The Bachelor: Listen to Your Heart, #BlackAF, The Midnight Gospel, and Too Hot to Handle. 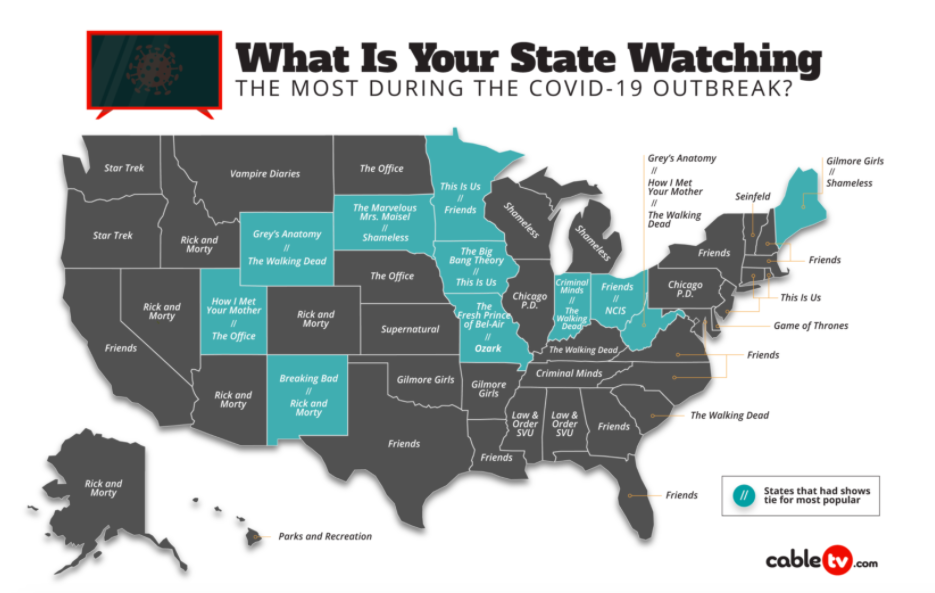 In terms of the methodology used to come up with these rankings, the results of which you can see in the graphic above to check out your state’s favorite show, the website surveyed a total of 6,852 respondents and asked what they were watching while sheltering at home. “The most popular titles were then analyzed using Google Trends data to discover which shows each region of the US was searching between March 1, 2020, and April 21, 2020,” the site explains.

Here’s the full rundown in list form, in case you need some ideas for new series to add to your quarantine binge-list: