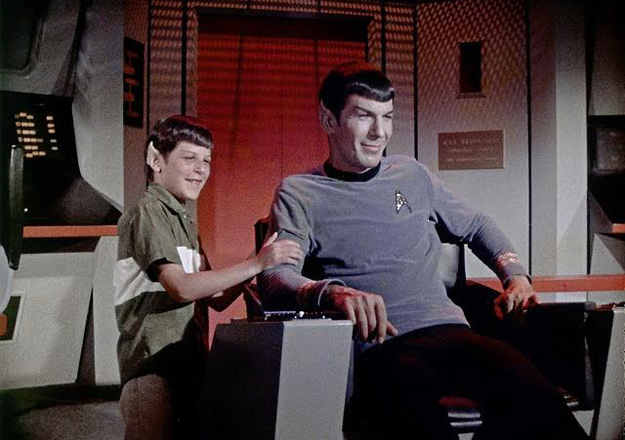 In a November 2015 episode of The Big Bang Theory — “The Spock Resonance” — Jim Parsons’ character Sheldon can be seen at one point addressing a video recorder and professing his respect for the half-human, half-Vulcan officer so essential to the Star Trek franchise.

The moment is a typical bit of Sheldon uber-geekery. He’s giving a brief interview to a documentarian during the episode, and we learn, for example, how as a child Sheldon decided to tweak his mother’s constant admonition of “What would Jesus do?” to “What would Spock do?”

The man holding in the camera in the scene — we see him address Parsons’ character briefly — is Adam Nimoy. His late father Leonard was of course the actor who made the role of Spock so iconic and such a staple of pop culture that even 50 years after the first episode of Star Trek aired on NBC in 1966, the pointy-eared, emotionally detached character still feels as familiar and resonant as ever.

There’s another reason Nimoy’s son was on the The Big Bang Theory set that day. He’s putting the final touches on a documentary he plans to release later this year called For the Love of Spock, in honor of his father, who died in February 2015. And it seemed fitting, Nimoy tells BGR, to include along with a host of remembrances, show clips and more an “interview” in his film with a Star Trek-loving character on one of the most popular TV shows today.

Some of what Nimoy is shown filming during that Big Bang episode will be seen in his documentary, which he says will be ready in time for the 50th anniversary of series in September.

“Interviewing Sheldon about his fandom of Spock — that was their idea,” Nimoy said. “They were kind enough to allow me to use some of that (Sheldon) footage in the documentary. The whole purpose was to show how Spock continues to appear and reverberate through popular culture today.

“One of the things that still stands out for me, in making this, was being reminded of the effect he had on so many people. Up in Vancouver, doing interviews of actors involved in the new Star Trek movies, you could still feel the energy. It was heartwarming. Just the amount of love for the character and my dad as an artist and humanitarian – it still kind of surprises me.”

Nimoy screened a festival version of the film a few weeks ago as part of the Tribeca Film Festival. He also took part in a panel discussion around the screening that included Zachary Quinto, the actor who plays Spock in the rebooted Star Trek film franchise and who narrates Nimoy’s documentary.

Thanks to contributions from Trekkies with an abiding appreciation of the series, the Spock doc is being made with the help of more than $662,000 from upwards of 9,400 backers.

For the director, it’s surreal on a number of fronts.

There’s the fandom that Nimoy says still surprises and delights him. He and his family are also still grieving the loss of the father who’s now being memorialized in his son’s work.

When Nimoy first started working on the project, in fact, it wasn’t even a memorial. His father was still alive, and the movie was going to be a kind of love letter to Spock and the actor who played him.

“One of the things I remember him telling me was whatever you’re doing — writing an article, anything, really – you need to find the personal connection to the material you’re working with,” Nimoy said. “To make it real, to make it come alive and exciting to be involved with.”

Not hard to do, when the subject of the movie you’re making is your father.

The film showers fans with photographs, interviews, clips from old episodes and lots more. We see Spock’s famous salute. We see him heroically standing up to aliens.

“I love watching these scenes over and over again,” Nimoy said. He mentions, as an example, a scene showing the relationship between Spock and the character Leila Kalomi in the episode titled “This Side of Paradise.”

In it, strange flowers weaken Spock’s inhibitions and he falls in love with Leila, played by actress Jill Ireland.

“The one thing most people interviewed (in the documentary) seemed to glom on to is that Spock is an outsider,” Nimoy says. “He’s an alien on the bridge of the Enterprise around a human crew, but he’s still accepted and working to contributed to the group for the betterment of the missions they’re on. That resonated with a lot of people. That it’s ok to be different. That it’s quite cool to be different.”

Nimoy didn’t mention the famous four-word phrase associated with his father during our interview. But in a follow-up email to BGR, he signed off with four letters in all caps: