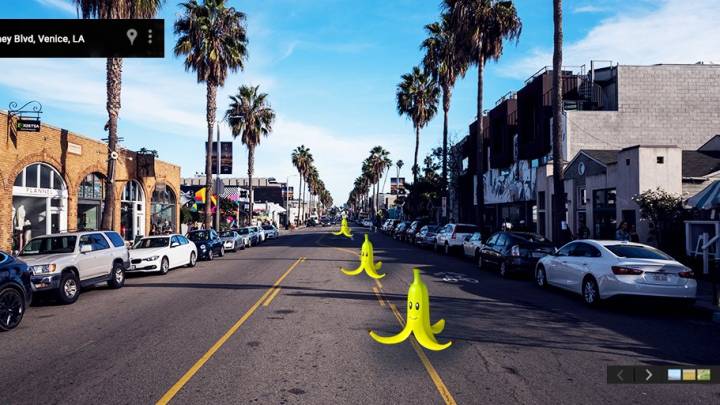 Google has been known to sprinkle in Easter eggs on Google Maps to commemorate events and special occasions, but the most recent surprise might be the best yet. On Thursday, Google tweeted an image of Street View in Venice, Louisiana with banana peels from Mario Kart lining the road. The body of the tweet consisted solely of three banana emojis and a car emoji. Clearly, Google was preparing a Mario-related announcement for the coming days.

But then on Thursday, YouTube host and streamer Trisha Hershberger was among the first to receive a notification in Google Maps that she could “navigate [her] world as Mario to celebrate Mario Day on March 10th.” (If you can’t figure out why March 10th is Mario Day, here’s the simple explanation: MAR10.)

Starting today, the iconic question mark block from the Nintendo games will begin appearing in Google Maps. Once it does, you can tap it to turn your navigation arrow into Mario for the remainder of the event. Bananas might also begin appearing in the Street View mode, and there may be more secrets as well.

Wahoo! Now you can navigate the world as Mario in @GoogleMaps to celebrate #MAR10Day! Check out #MarioMaps on Google Maps now for a week. pic.twitter.com/iX3uZMfLrc

This isn’t the first time that Nintendo and Google have teamed up like this. Back in 2014 (long before Pokemon Go launched on mobile devices), Google unleashed dozens of wild Pokemon in Google Maps, giving users a chance to walk around their cities and fill up their Pokedex. It turned out to be an elaborate April Fool’s prank.

It appears that the Mario Day Easter egg has already begun to roll out to everyone, so expect to see it on your app soon. It’s not quite Mario Kart Tour, but maybe it’ll make the wait a little easier.