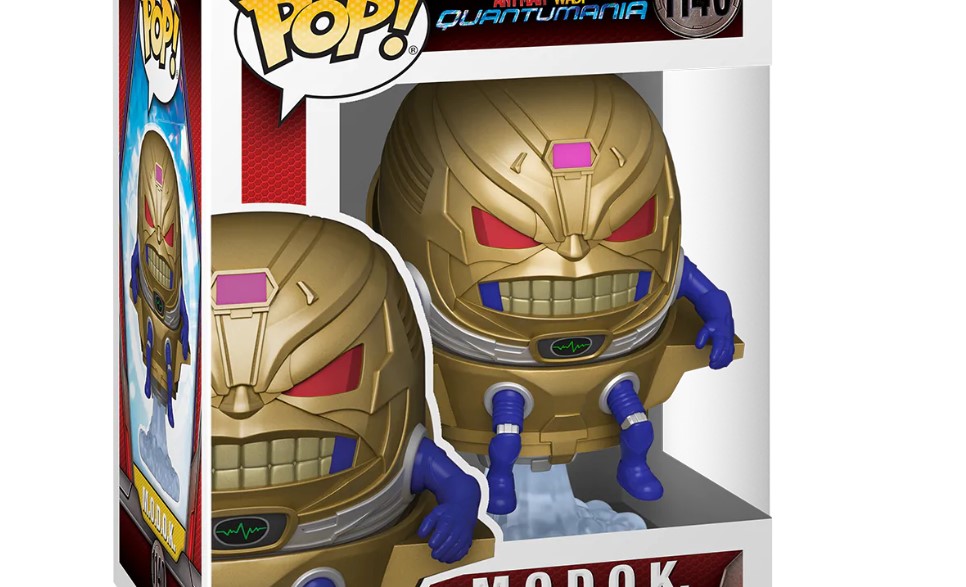 Marvel fans are understandably excited about seeing Kang the Conquerer (Jonathan Majors) for the first time since the Loki season 1 finale in Ant-Man and the Wasp: Quantumania, but he won’t be the only villain present in the upcoming sequel. In fact, we will meet a number of characters we have never seen in the MCU before, including MODOK. The villain hasn’t shown up in any of the Ant-Man trailers yet, but a toy might have spoiled MODOK’s design.

This week, Funko published the product listing page for the bobblehead based on MODOK from Ant-Man and the Wasp: Quantumania on its website. As in the comics, MODOK has a tiny body and a massive head, and he hovers around in the Doomsday Chair.

As with many Marvel villains, MODOK became a monstrous wrongdoer as the result of a science experiment gone wrong. He first appeared in a 1967 issue of Tales of Suspense before eventually becoming a Captain America foe. While we typically see his face, he appears to have encased his head in a gold helmet this time around. Here’s the unreleased Funko Pop:

We already knew MODOK would be part of Ant-Man 3 because he appeared in the San Diego Comic-Con 2022 trailer that has yet to see the light of day. We don’t know what role he will play, but in the comics, he is an employee of Advanced Idea Mechanics (A.I.M.). In the MCU, A.I.M. was founded by Aldrich Killian, aka The Mandarin (Guy Pearce). We haven’t seen much of A.I.M. since Iron Man 3, but they might have a part to play in Phase 5.

Marvel has yet to reveal who will play MODOK in the MCU. In the official Iron Man 3 video game, A.I.M. downloaded Killian’s consciousness prior to his death to create MODOK. If that turns out to be canon, then Guy Pearce may return to voice the character (though Tony did defeat MODOK in the game). But if this is a MODOK from another universe, Marvel could bring back Patton Oswalt, who voiced the character in Hulu’s animated MODOK series.

Whatever Marvel decides to do with MODOK in the MCU, we will find out when Ant-Man and the Wasp: Quantumania hits theaters on February 17, 2023.

Ant-Man and the Wasp: Quantumania Marvel