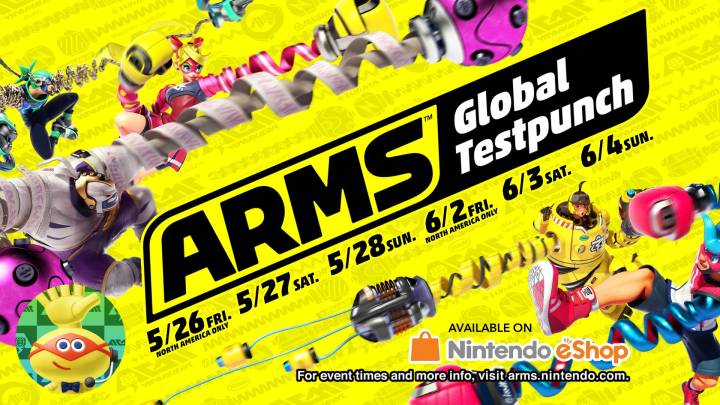 While Super Mario Odyssey and Splatoon 2 are sure to hog the spotlight on the Switch in the second half of 2017, there’s another first-party game from Nintendo that has piqued our interest. ARMS — a fighting game that utilizes motion controls — will be the first big Switch game to launch after E3 2017 and will serve as the bridge to Splatoon 2, which doesn’t come out for the Switch until late July.

If seeing the game in action during the latest Nintendo Direct wasn’t convincing enough, Nintendo is holding a stress test for the game this weekend which any Switch owner can participate in.

Much like the Splatoon 2 Global Testfire, the ARMS Global Testpunch will take place over two weekends and will be broken up into hour-long sessions. You can check the full schedule below:

If you want to play, all you have to do is download the ARMS demo from the Switch eShop (which is actually available right now) and jump in during any of the times listed above. Nintendo didn’t specify how much content would be available during the stress test, but if the Splatoon test was anything to go by, there should be plenty to keep players occupied for at least a session or two.

If you missed the ARMS Direct, we’ve embedded it below. Everything you could possibly want to know about the game is contained within this 20-minute video, along with tons of gameplay footage:

ARMS will be available exclusively for the Nintendo Switch on June 16th.