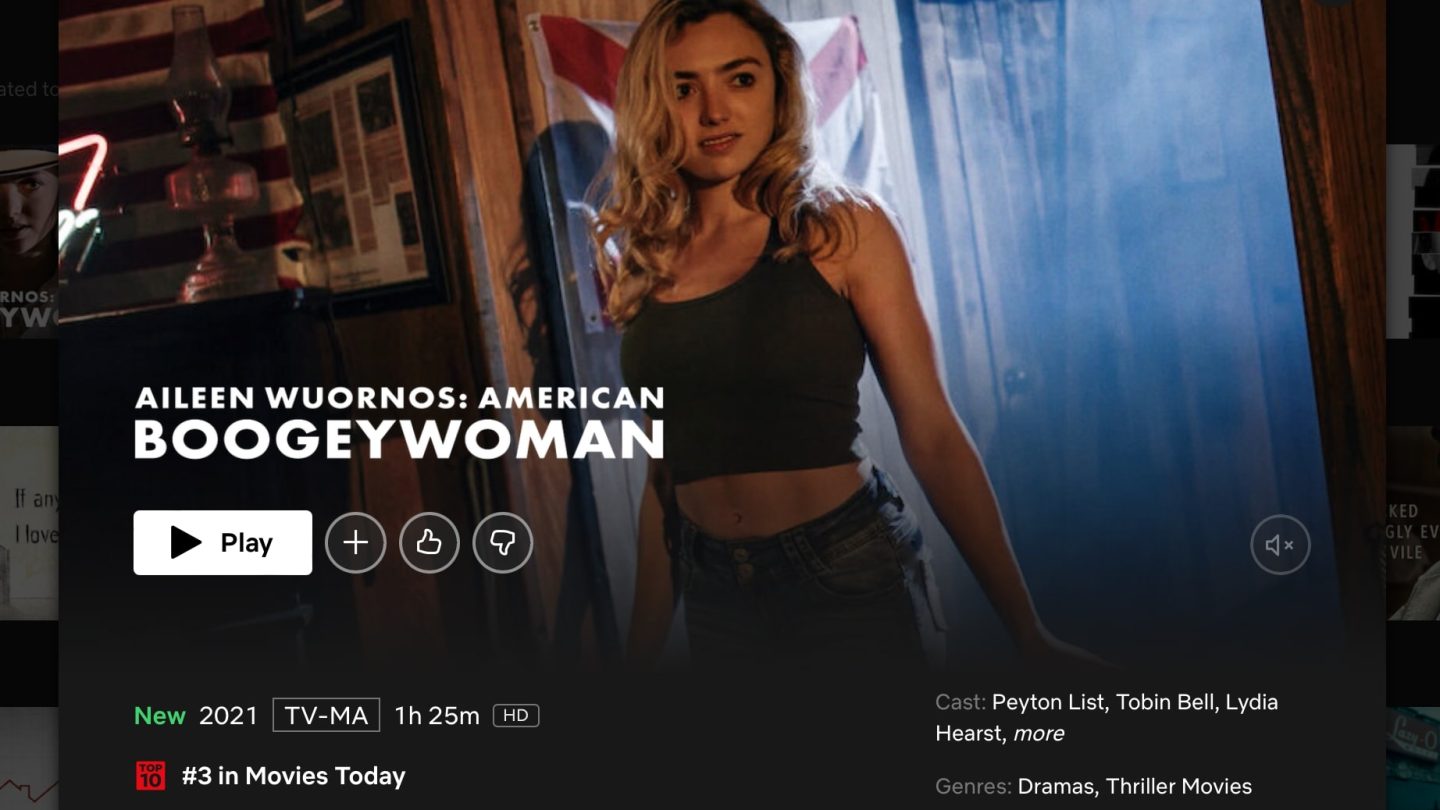 “I guess I always did dream of being famous.” Those are the first words we hear in the trailer for 2021’s Aileen Wuornos: American Boogeywoman, about an infamous female serial killer. “I didn’t take no crap from nobody. ‘Specially men.”

As recounted in Netflix’s summary of this film — which is currently one of the top streaming titles on the platform — it tracks the life of Aileen Wuornos. Wuornos is a woman who married a yacht club president in 1976 and went on to cause mayhem in Florida’s high society. Starring Peyton List, Tobin Bell, and Lydia Hearst, this movie combines elements of two genres that regularly produce streaming gold for Netflix: True crime, with some elements of horror. The result?

Aileen Wuornos, as of the time of this writing, is the #3 movie in the US on Netflix (which maintains daily updated Top 10 lists for TV shows as well as movies).

In terms of that full Top 10 movies list, we’ve got the complete rundown at the bottom of this post. Meantime, here’s what else to know about this serial killer drama:

For one thing, the early reviews that have trickled in have … well, pretty much savaged the movie. For example, from Decider: “Aileen Wuornos: American Boogeywoman wants to be another chapter in the Monster story, but it’s not clear who asked for this to be told, and besides that, it reads flimsier than a grocery store tabloid.” And it just gets worse from there:

Twitter users, meanwhile, were even more brutal than that.

“I’m so confused,” one user posted on Twitter. “Was (Aileen Wuornos) supposed to be shit or was it just shit?”

Long story short: This is one of the most-watched films on Netflix at the moment. But you have been warned. People are more or less hating it, with a passion.

As far as what other feature films are trending and among the most popular on Netflix right now? The streamer tracks the most-watched titles on a regular basis. For today, January 26, we’ve got a snapshot of those most-watched movie titles below. Where you’ll also find links to their Netflix landing pages, as well as links to our previous coverage of some of the titles.

You can also follow our ongoing coverage of the new titles constantly added to Netflix on a weekly and monthly basis.