We hear a lot about deceptive billing practices and bad customer service in the cable industry, but it’s not often we get to see such a carefully masterminded scheme to increase prices without anyone really noticing.

Over the last few months, Cox has pushed a one-terabyte data cap to customers in the majority of states it serves, including Arkansas, Connecticut, Florida, Georgia, Idaho, Iowa, Kansas, Nebraska, Ohio, Arizona, Louisiana, Nevada, and Oklahoma. Now, just a couple months after bumping customers from an unlimited service to one that’s metered, Cox is introducing a “new” unlimited broadband add-on, which costs $50 on top of the basic plan.

Make no mistake about it: Cox has gone sideways to end up at a point where, to get the same plan that you enjoyed a year ago, you have to pay $50 more. That’s the opposite of what’s supposed to happen.

Cox is framing this as a move that’s about fairness, and a spokesperson said that the move will only affect “the very small percentage of broadband customers who exceed 1 terabyte of usage per month.” We’ll come back to that part later, but for now, let’s consider how this move works for Cox.

You might be shocked to hear this, but charging different internet users a different amount of money based on their usage isn’t an entirely ridiculous proposition. A small handful of users may well be using the network more heavily, and a pricing structure that reflects the usage isn’t ridiculous.

But here’s what should happen, if the laws of competition actually applied to home broadband. Low-use customers would get a price cut to reflect the low usage, and everyone else would continue to pay the same amount of money for the unlimited plan that they signed up for. T-Mobile, by the way, does this on its unlimited mobile data plan: anyone who uses less than 2GB of data per month gets a $10 “Kickback”.

Instead, Cox is charging all its customers the same amount of money for a lesser service, and has raised the price of its unlimited data plan by $50. Over the same time period, the cost (to Cox) of every gigabyte of data hasn’t changed. If anything, it’s gone down. The only pricing difference is that now Cox will collect $50 more per month from around two percent of its customers.

Now, there’s a fair chance that you use less than a terabyte of data per month, and this change doesn’t affect your life — yet. The thing is, if the historical trend continues (and every shred of data suggests that it will!), average household data use will continue to skyrocket. Data traffic across the internet increased by a truly staggering 56,277% — yes, you read that right — between 2000 and 2014. Average data use went from 9GB per month in 2009 to an estimated 190 gigabytes per household last year. Depending on what estimate you use, that means that average household consumption should go way past 1TB per month — Cox’s threshold — by the end of the decade.

Cox’s cap might seem reasonable now, but there’s almost zero chance that the cap will increase in line with data usage. The end game here is to transition home internet users off unlimited plans, and onto a metered system, as users will increasingly start running into a data cap that was previously seen as ridiculously generous. And, because the cap has been there for years without you noticing, there’s no sudden shock.

Cox isn’t alone in doing this. Home broadband caps have spread like norovirus on a cruise ship, going from a rarity to the norm over the last two years. No-one can complain, because most people don’t have a choice. Nearly 80 percent of Americans have only one (or no!) choice for high-speed broadband, so you basically have to shut up and do what you’re told. 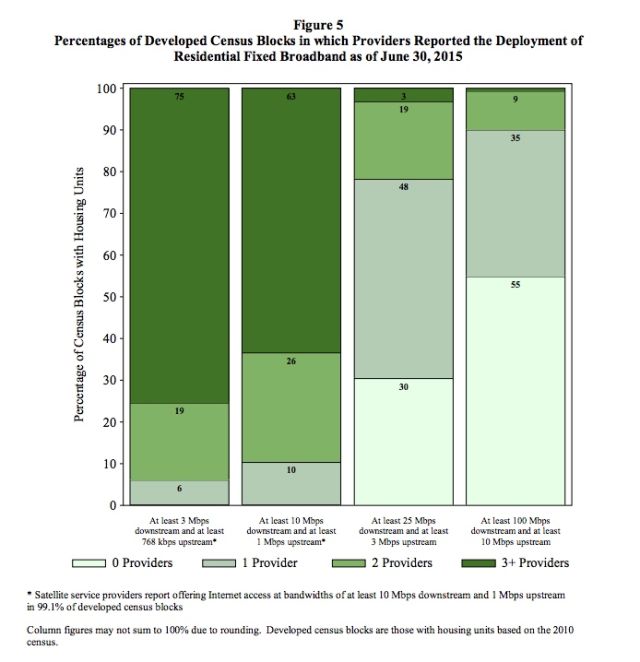 Sound like the kind of anti-competitive, growth-threatening problem that the government should solve? I have some bad news for you. The Federal Communications Commission, led by former Verizon lawyer Ajit Pai, is actively working to make things easier for monopolistic internet providers. Since taking control in January, Pai has moved to undo rules that protected net neutrality and enabled the FCC to regulate internet providers; suggested that the definition of high-speed broadband should actually be made slower; and moved to stack his advisory committee with reps from the same companies he’s supposed to be regulating.

Our best hope — and it’s saying something that this is the most silvery lining — is for wireless providers like T-Mobile, Sprint, and AT&T — to use the coming 5G technology to start providing home broadband. The cost per GB of wireless data is set to plunge in the coming years, to the point where it may become cheaper than fixed-line internet. Because there are four wireless providers in direct competition with each other — unlike cable, which is a series of regional monopolies — prices should keep going down, to the point where wireless is cheaper than wired. At that point, Cox might have to be awoken from its rent-seeking slumber and start competing.

Tweet
Uber just got absolutely nailed by the FTC, agrees to audits for the next 20 years