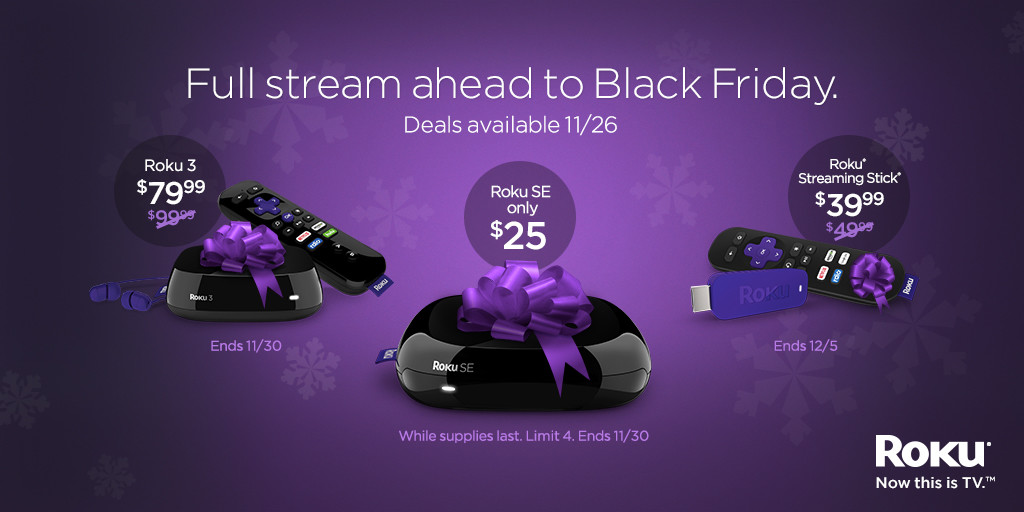 Over the past few weeks, we’ve seen enough Black Friday ads to last us until 2025, but now that the retailers have all detailed their plans for the shopping holiday, some companies are getting in on the action themselves.

On Monday, Roku unveiled its Black Friday 2015 deals, and if you’re in the market for an affordable media player, you might want to make this the first place you look.

According to the blog post on Roku’s website, the following deals will be available on November 26th:

There are some notable difference between the hardware, but each of the streaming media players listed above will come with Roku’s new OS 7 operating system, 1080p video streaming, access to 3,000 streaming channels and over 300,000 shows and movies as well as a Roku mobile app for iOS and Android.

Roku also says that Roku TVs will be on sale over the weekend, including a 32″ TCL Roku TV for as low as $125 and a 55″ TCL TV for $348 “from select national retailers, including Walmart, both online and in store.”

Finally, the purchase of any Roku product between now and January 16th, 2016 will net you content offers valued around $100, including a three-month free trial of Hulu Limited Commercials, three free HD movie rentals from CinemaNow and one month of Showtime’s streaming service for free.