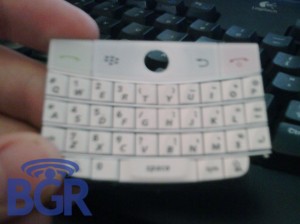 At least it’s not pink… We received an email from a professor at York University (in Canada) where we’re told TELUS and now WIND utilize their advanced wireless testing facilities. Since they do so much testing, it stands to reason RIM would be pretty interested in sending them devices to test, right? Well, it seems that RIM sent York University an all white BlackBerry Bold. Here’s a picture of the keyboard and there’s a shot of the back after the break. What do you guys think? Me likey.