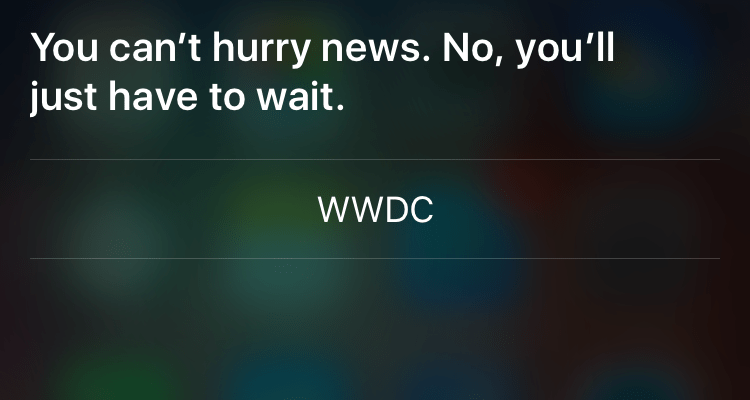 Apple is known for hiding easter eggs in Siri auto-replies. In fact, the dates of WWDC 2016 first ‘leaked’ through a Siri answer. But if you push her for any more details, prepare to get amusingly stonewalled.

As MacRumors spotted, Siri has a list of responses to different questions about what to expect at WWDC. As you might imagine, she’s not very forthcoming. But there are a few Game of Thrones references in there to tide you over until Monday.

I’ve tried just about every question I can think of about WWDC to Siri, and she mostly stonewalls me. The default answer seems to be “I’m so excited about WWDC! You can find out all about it on Apple’s website.” But MacRumors has found far more answers, including some excellent Game of Thrones references:

This is widely expected to be one of Apple’s biggest conferences in years. We can expect to see iOS 10, a new version of OS X (possibly renamed MacOS), and some kind of smart home hub sporting Siri. In fact, the conference seems to be so packed that Apple has already started announcing news, like ads coming to the App Store, and a new subscription-based pricing service for developers.

There’s also talk of new hardware. The next iPhone will almost definitely wait until September, but a new line of Macbooks (including a refresh to the Macbook Pro line) is also expected. With so much stuff rumored to be coming, it’s cruel of Siri not to give us anything to go on.