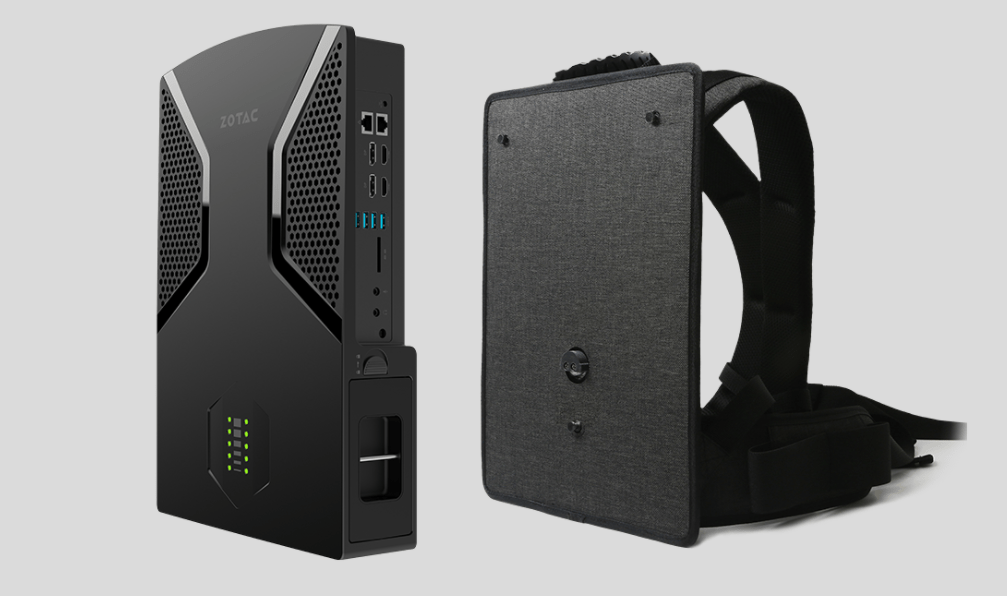 Gaming PCs don’t belong on your back, but that’s not stopping Zotac from building a wearable, battery-powered gaming rig that hangs from your shoulders. Why? Well, virtual reality, of course!

Like it or not, virtual reality is being held back by hardware that simply can’t keep pace with the software it runs. We already have exquisitely detailed, gorgeous virtual worlds on gaming computers, but finding a way to cram them into a pair of goggles has been an absolute nightmare.

The PSVR, HTC Vive and Oculus Rift, as great as they might be, are still bulky, heavy, cumbersome gadgets with long, thick tethers that quickly destroy any feeling of virtual “freedom” whenever you step on, trip over, or accidentally yank on them. If you toss the PC or console out of the equation in favor of a smartphone, you gain a modicum of liberty while sacrificing performance and immersion.

Zotac thinks it has a solution to this problem: a battery-powered gaming rig that you wear. It, in theory, frees you from the clutches of long, tangled cables by making the entire PC-driven VR experience a wearable one.

The specs of Zotac’s VR Go Backpack are actually pretty solid, with an Intel i7-6700T, GTX 1070, and 8GB of memory. It’s a suitable rig for most titles, and should handle any VR experience you can throw at it, at least for now. It also doubles as a portable gaming PC even if VR isn’t your thing, but virtual reality is obviously its primary purpose.

It comes with a pair of battery packs, each with a capacity of 6,600 mAh, which equates to two hours of use. That’s not terrible, as most VR experiences would lead to some serious discomfort after two — let alone four — hours.

Speaking of discomfort, that’s the biggest sticking point of Zotac’s new rig. All it’s really doing is solving one problem while exacerbating another. If you thought a Vive or Rift was already a bit of a burden to be wearing while gaming, imagine slapping an entire PC to your body, too. Zotac hasn’t revealed how much the VR Go Backpack weighs, but considering it’s a relatively high-end machine with a massive battery pack, it’s not going to be light.

Also in the TBD column are the device’s price and availability. That might not really matter at all, though, because even if you’re an incredibly die-hard VR fan, it’s going to be a hard sell