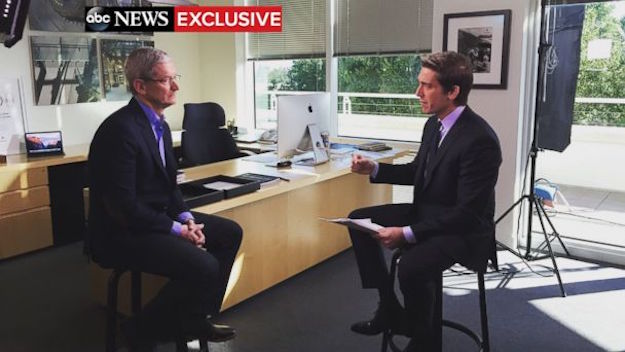 On Wednesday night’s edition of World News Tonight on ABC News, host David Muir will sit down with Apple CEO Tim Cook to discuss the company’s ongoing battle with the FBI over whether or not the unlock the phone of one of the San Bernardino shooters.

From the moment the story broke, Apple has made it very clear that it does not feel comfortable building software that would allow the FBI to break into the shooter’s iPhone. As Apple explained exhaustively in an FAQ on its website, building a tool to unlock this phone would set a dangerous precedent, while simultaneously counteracting everything Apple has done to keep its users safe.

American citizens, on the other hand, appear to be leaning in favor of the FBI. In a recent poll from the Pew Research Center, the FBI managed to collect a majority of the vote from respondents, winning every category but one.

We’ve heard both sides of the story and we know the risks associated with both potential outcomes, but this is the first time we’ll see Cook in a setting where he has to answer (what we hope will be) some hard-hitting questions.

You can watch the interview on ABC News between 6:30-7:00 p.m. EST during World News Tonight on Wednesday, February 24th. The extended interview will then be posted on ABCNews.com after the program airs.

EXCLUSIVE: Apple CEO @Tim_Cook sits down with @DavidMuir on FBI vs. Apple and the San Bernardino shooter’s iPhone pic.twitter.com/LS9TArD7aO