Say what you will about Tesla, but the company certainly knows how to generate some buzz. In a somewhat peculiar move lifted straight out of Apple’s playbook, Tesla earlier today took the order pages on its website offline. Instead, users looking to buy either a Model S, Model X, or Model 3 were shown a cryptic message that read: “The wait is almost over. Great things are launching at 2pm.”

Naturally, speculation as to what Tesla had in store quickly ran wild. Could it be the big reveal of the rumored Model Y, or even the intriguing Tesla pickup truck? Others, meanwhile, assumed that Tesla would finally announce the arrival of its long-promised $35,000 Model 3 or, perhaps, some wild new Autopilot-related announcement. Okay, we’ll just cut to the chase at this point. Just a few moments ago, Tesla updated its website and revealed that the $35,00 Model 3 — which was always part of Tesla’s master plan — is coming soon.

If you go to the Model 3 order page on Tesla’s website, this is what you now see. Specifically, the page notes that the more affordable Model 3 will be available in just 2-4 weeks. The base model, as evidenced below, has 220 miles of range. Not surprisingly, you’ll have to pay quite a bit extra if you want a Model 3 with a faster 0-60 time than 5.6 seconds. 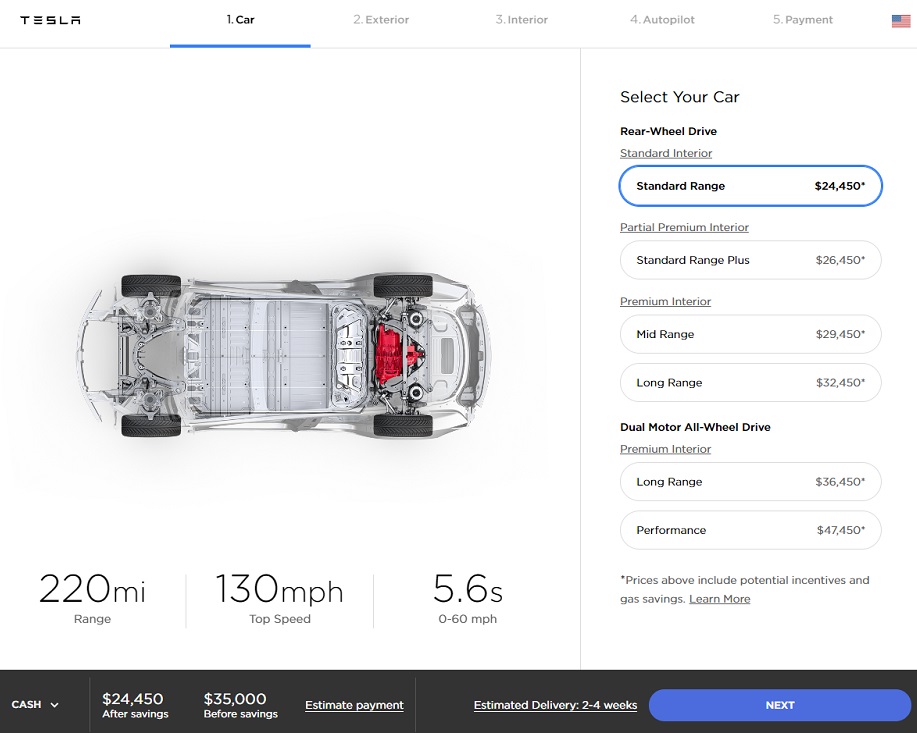 While demand for the Model 3 was never an issue, many of the folks with outstanding reservations were hoping to get their hands on a $35,000 model. But Tesla, in an effort to boost revenue, understandably focused on rolling out more profit-friendly versions of the Model 3 first. Recall, Musk last May said that selling the minimum cost Model 3 at the time would “cause Tesla to lose money and die.” Musk added that Tesla wanted to boost production to a steady rate of 5,000 units per week before making the entry-level Model 3 available.

Tesla’s blog post on the new Model 3 can be seen below:

We are incredibly excited to announce that the standard Model 3, with 220 miles of range, a top speed of 130mph and 0-60mph acceleration of 5.6 seconds is now available at $35,000! Although lower in cost, it is built to achieve the same perfect 5-star safety rating as the longer-ranged version, which has the lowest probability of injury of any car ever tested by the U.S. Government.

In addition, we are introducing the Model 3 Standard Range Plus, which offers 240 miles of range, a top speed of 140mph, 0-60mph acceleration of just 5.3 seconds and most premium interior features at $37,000 before incentives. For 6% more money, you get 9% more range, more power, and an upgraded interior.

To achieve these prices while remaining financially sustainable, Tesla is shifting sales worldwide to online only. You can now buy a Tesla in North America via your phone in about 1 minute, and that capability will soon be extended worldwide. We are also making it much easier to try out and return a Tesla, so that a test drive prior to purchase isn’t needed. You can now return a car within 7 days or 1,000 miles for a full refund. Quite literally, you could buy a Tesla, drive several hundred miles for a weekend road trip with friends and then return it for free. With the highest consumer satisfaction score of any car on the road, we are confident you will want to keep your Model 3.

Shifting all sales online, combined with other ongoing cost efficiencies, will enable us to lower all vehicle prices by about 6% on average, allowing us to achieve the $35,000 Model 3 price point earlier than we expected. Over the next few months, we will be winding down many of our stores, with a small number of stores in high-traffic locations remaining as galleries, showcases and Tesla information centers. The important thing for customers in the United States to understand is that, with online sales, anyone in any state can quickly and easily buy a Tesla.

At the same time, we will be increasing our investment in the Tesla service system, with the goal of same-day, if not same-hour service, and with most service done by us coming to you, rather than you coming to us. Moreover, we guarantee service availability anywhere in any countries in which we operate.

We’re also excited to announce that we’re implementing a number of firmware upgrades for both new and existing customers. These upgrades will increase the range of the Long Range Rear-Wheel Drive Model 3 to 325 miles, increase the top speed of Model 3 Performance to 162 mph, and add an average of approximately 5% peak power to all Model 3 vehicles.

Tesla is committed to making not just the best electric cars, but the best cars, period. And our products are the reason we continue to rank #1 in Consumer Reports owner satisfaction survey and have every single year since Tesla was first eligible to be included in 2013. Both Model 3 Standard and Standard Plus are available starting today at Tesla.com.