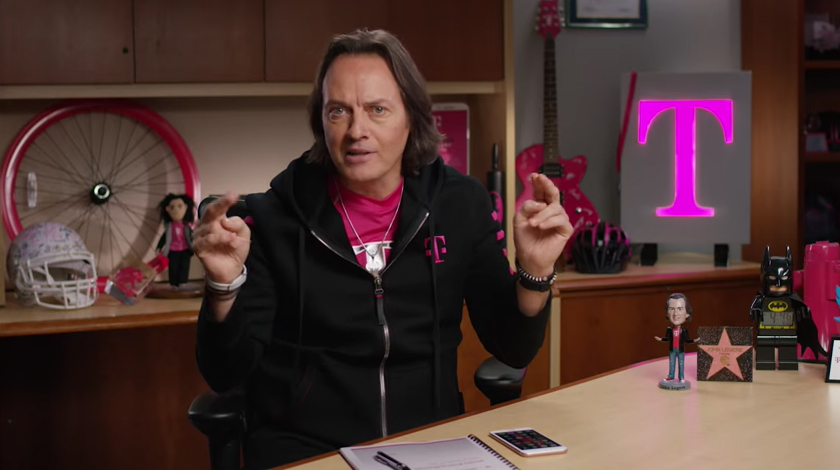 The controversy over T-Mobile’s free-to-binge Binge On data program is not over, and CEO John Legere felt on Monday that he had more explaining to do, especially after blasting the EFF last week while talking to consumers on Twitter. Legere apologized for attacking the EFF, but he did not apologize for Binge On, or his language – in fact, he continued to explain in his lengthy post on T-Mobile’s blog how Binge On is pro net neutrality.

Rather than start with an apology right away, the CEO buried it towards the end of the post, immediately after detailing how Binge On works. Last week, Legere blatantly asked “Who the fuck is the EFF?” in a short video last week, with EFF supporters being quick to explain it to him. The EFF proved that T-Mobile is throttling all video, regardless of whether content providers are enrolled in Binge On or not.

The EFF proved recently that T-Mobile is throttling all video, regardless of whether content providers are enrolled in Binge On or not.

“Look, by now you know that I am a vocal, animated and sometimes foul mouthed CEO,” Legere began his apology. “I don’t filter myself, and you know that no one at T-Mobile filters me either (no, they don’t even try). That means I will sometimes incite a bit of a ‘social media riot’, but I’m not going to apologize for that.”

“I will, however, apologize for offending EFF and its supporters,” he said. “Just because we don’t completely agree on all aspects of Binge On doesn’t mean I don’t see how they fight for consumers. We both agree that it is important to protect consumers’ rights and to give consumers value. We have that in common, so more power to them. As I mentioned last week, we look forward to sitting down and talking with the EFF, and that is a step we will definitely take. Unfortunately, my color commentary from last week is now drowning out the real value of Binge On – so hopefully this letter will help make that clear again.”

He did not use the word “throttling” once in his post, but he did say that Binge On is “optimizing all of your video for your mobile devices.”

At the same time, he made sure he mentioned how T-Mobile supports net neutrality, and that Binge On works in the same spirit.

“But here’s the thing, and this is one of the reasons that Binge On is a VERY “pro” net neutrality capability – you can turn it on and off in your MyTMobile account – whenever you want,” he said. “Turn it on and off at will. Customers are in control. Not T-Mobile. Not content providers. Customers. At all times.”

Earlier in the post, he noted that “T-Mobile is a company that absolutely supports Net Neutrality, and we believe in an open and free Internet. We want to continue to innovate and bring creative new benefits to market for all of our customers. That is who we are. It’s what we do. It will never change.”

For the consumers who watch a lot of videos, Binge On is definitely a great initiative. But, unfortunately, T-Mobile thinks it can simply force poorer quality videos on you, even if you don’t want that. And that’s something Legere is yet to explain properly.

“Most video streams come in at incredibly high-resolution rates that are barely detectable by the human eye on small device screens, and this is where the data in plans is wasted,” he explains in the post, and that’s a reasonable argument. But, then, why is T-Mobile selling smartphones that have Full HD and 2K displays if it doesn’t want customers to enjoy those displays?