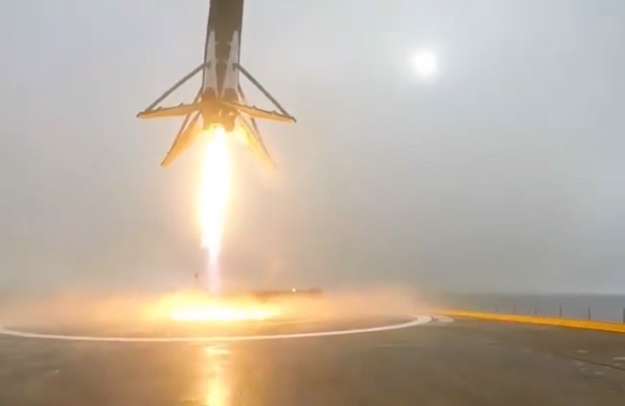 It was a bittersweet weekend for SpaceX. On one hand, the company on Sunday afternoon successfully launched a weather satellite into orbit. On the opposite end of the spectrum, the company’s third attempt to safely bring back a rocket booster and have it safely land on a floating ocean barge ended in an explosion.

DON’T MISS: iOS 9.3 may hint at Apple’s plans to shake up its iOS release strategy

Just 10 minutes after SpaceX’s Falcon 9 rocket took off from its launchpad, it came back to earth where it tried to pull off a historic landing atop of a floating barge in the Pacific Ocean. Unfortunately, the rocket was unable to stick the landing. Shortly thereafter, SpaceX CEO Elon Musk tweeted that the rocket experienced a “hard landing” upon impact, resulting in a broken landing leg which led to the rocket toppling over and subsequently exploding in a fiery display.

Late on Sunday, Elon Musk took to Instagram where he posted the first video footage of the failed rocket landing. Adding a few more details to the failed landing, Musk writes: “Falcon lands on droneship, but the lockout collet doesn’t latch on one the four legs, causing it to tip over post landing. Root cause may have been ice buildup due to condensation from heavy fog at liftoff.”

Video of the crash can be seen via the Instagram embed below.

Falcon lands on droneship, but the lockout collet doesn’t latch on one the four legs, causing it to tip over post landing. Root cause may have been ice buildup due to condensation from heavy fog at liftoff.

Despite Sunday’s failure, it’s not as if SpaceX hasn’t had anything to cheer about lately. Remember that the company this past December successfully launched a Falcon 9 rocket and brought the booster back to earth, landing it safely on a concrete landing pad.