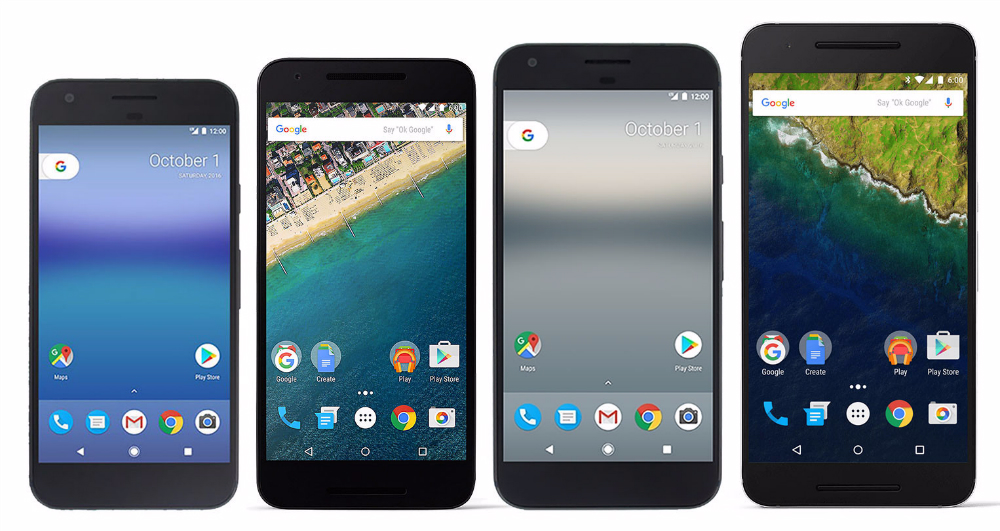 Google is ditching Nexus branding on this year’s new smartphones in favor of a new “Pixel” moniker. The devices also come with a new pitch. They’re no longer pure Android devices, nor are they affordable. The Pixel and Pixel XL will be high-end smartphones that are meant to rival the iPhone 7 and this year’s top Android devices.

In 2015, Google released the Nexus 5X and Nexus 6P made by LG and Huawei, respectively. These are 5.2-inch and 5.7-inch handsets that’ll be slightly bigger than their Pixel-branded alternatives.

The Pixel, also known as the Sailfish, is supposed to have a 5-inch display. The Pixel XL, or the Marlin, will have a 5.5-inch screen. Android Central used the recently leaked Pixel and Pixel XL press renders to compare them to last year’s Nexus devices — as seen in the image at the top of this post.

From left to right, we have the Pixel, the Nexus 5X, the Pixel XL and the Nexus 6P. We will point out that we don’t have the official specs list for the Pixel handsets, which means their exact dimensions aren’t known at this time. But the image above is still useful, as it gives us a general idea of what to expect from Google’s next-gen flagship smartphones when it comes to size and pocketability.

Google will unveil the Pixel and Pixel XL on October 4th during a special media event that’s also supposed to bring us at least one big surprise as well.