Netflix is rolling out a new feature today that’s going to mean a lot more content from the streaming video giant will start showing up in your Instagram Stories.

Via an update to the iOS version of its app, you’ll now be able to share what you’re watching on Netflix directly to your Instagram Stories, letting your followers know what movie or TV show you’re bingeing at the moment. You’ll even be able to do so by sharing customized art from Netflix, on top of which you can layer stickers, polls and whatever else your heart desires.

No word yet on an Android release for this, though it’s in the works. If you’re on iOS, meanwhile this is how you do it and what it looks like. From the title page within Netflix, before you click either “play” or “resume,” tap the share icon next to the thumbs-up button. From there, you’ll get a choice of options that looks like this: 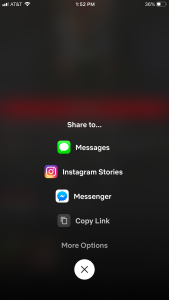 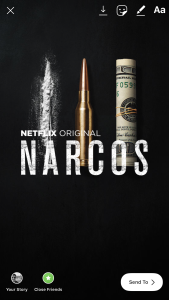 Now, you can add anything else you want by way of personalizing this addition to your story. And that’s all it takes. For extra convenience, the movies and TV shows shared this way also link back to Netflix, which makes this a bit of potentially useful viewership-boosting word-of-mouth promotion for Netflix.

A company spokesperson told Variety that the streaming giant is “always on the lookout for ways to make it easier for members to share the Netflix titles they’re obsessing about and help them discover something new to watch.” That, of course, will be more important than ever as competition in this space only continues to heat up, and it becomes increasingly critical for Netflix to keep subscribers hooked on the platform via originals and exclusives that they can’t get anywhere else as rivals continue to enter the streaming fray.

About all that Netflix content, we should also note that the company’s library is going to keep expanding at an explosive rate this year. Indiewire reported a few days ago that Netflix may spend as much as $15 billion on content for 2019, which will no doubt be welcome news to the subscribers who may not be exactly happy with the news last week that Netflix is implementing the biggest price increase in its history. All three of the company’s streaming tiers are going up by $2, though Netflix continuing to add a ton of content to the service may serve as a reminder to subscribers of the value they’re continuing to receive.