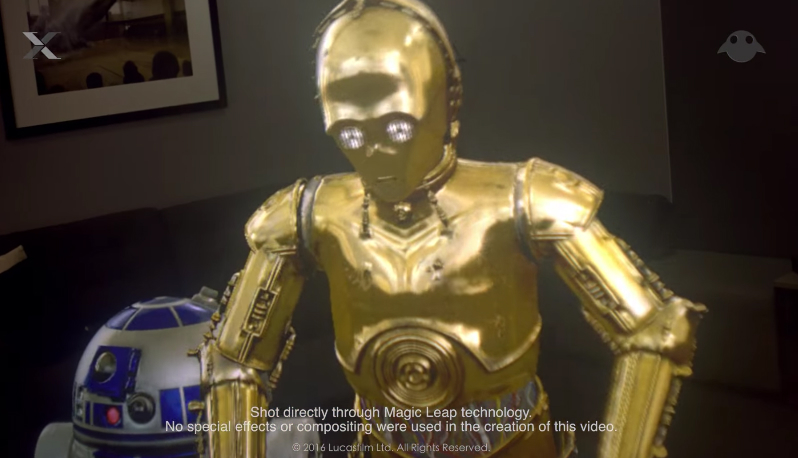 Of all the impressive virtual and augmented reality demos we’ve seen to date, Magic Leap’s videos always stand out. The company is far from releasing a commercial product, and it’s working on doing things right. But every once in a while, it releases amazing clips that demo the potential of its technology.

Whether it’s for work-related apps or entertainment and games, mixed reality will play a major role in the future of computing and Magic Leap wants to be at the forefront. The company’s latest video brings Star Wars droids C-3PO and R2-D2 to your living room. And we’re not talking about fan-made art for virtual or augmented reality experiences. This is an actual Magic Leap partnership with Lucasfilm’s ILMxLAB, and our beloved droids talk about Han Solo’s debt and secret missions.

As Wired explains, the droids aren’t played by actors and are instead computer-generated “phantasms” that look exactly like the real “solid” thing. And they interact with you, the viewer.

“Might I have a word with you please?” C-3PO asks you. “I regret to report that due to unforeseen circumstances, we have not yet reached the desired arrangement with Jabba the Hutt regarding Captain Solo’s debt.”

R2-D2 then comes in, connects to your desk, and projects an image on top of it. You can see the Stormtroopers attacking a village, the Millennium Falcon departing, and a slew of TIE fighters giving it chase.

Once again, Magic Leap technology proves to be quite stunning, and we can’t wait to see what sort of immersive experiences the company will build next, especially considering the impressive partnership with ILMxLAB, LucasFilm’s newest division that’s supposed to create new experiences for virtual, augmented and mixed reality.

Check out the full video below, and read more about Magic Leap’s work with ILMxLAB on Wired.