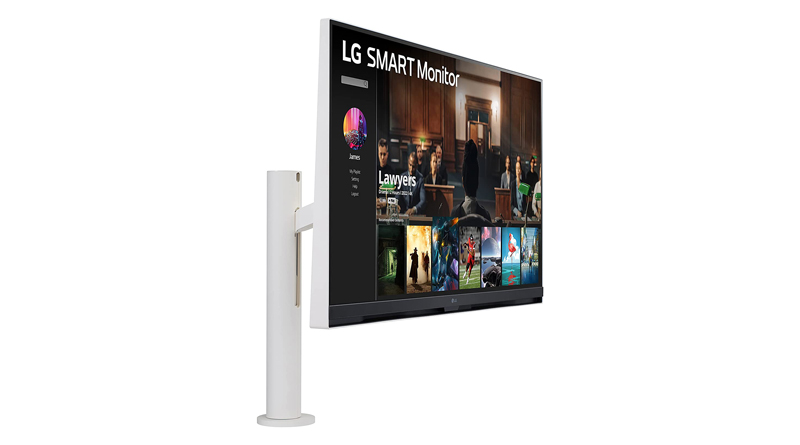 Today, LG is adding a new monitor to its lineup that looks to become not only your office’s monitor, but its television, too.

As reported by HomeKit News, the company has announced the LG Smart Monitor. The monitor, which exists under model number 32SQ780S, features a 32-inch 4K display and WebOS, the company’s operating platform that is usually found in its televisions. When you’re done using the monitor for work, WebOS will allow you to access all of the streaming services so you can watch movies and shows.

Now the company has released the LG Smart Monitor (model no. 32SQ780S) that not only also offers 4K screen resolution but includes AirPlay 2, like its predecessor, alongside WebOS. The screen size has also been bumped up from 27″ in the aforementioned ‘stand’ model, to a 32″ display. Whilst it’s ostensibly a monitor that would end up being used with a personal computer, it can be used as a regular 4K TV.

The monitor comes packed with ports

In addition to being a good base monitor for work and entertainment, it also comes with HDMI, USB-A, and even USB-C, so you can hook almost anything up to it.

The monitor comes complete with not only 2 HDMI ports – one of which eARC/ARC functionality – but also offers both three USB-A ports (one on the underside, two on the side of the monitor) and a USB-C port. Finally, it also provides hardwired connectivity, via an RJ45 port if you prefer not to use WiFi.

The monitor even comes packed with two five-watt stereo speakers, an integrated stand that’s made to attach to a desk, and that’s also able to rotate vertically. The only thing it feels like it doesn’t have is a built-in camera.

Details on its refresh rate have not been listed on its Amazon product page, but one thing it is likely not for is gaming as, with all of the productivity-focused features, the refresh rate is likely to sit at 60Hz.

Still, at $499, it is an incredible option for people looking to have a screen great for both productivity and entertainment. It could certainly end up on our list of the Best Computer Monitors of 2022.