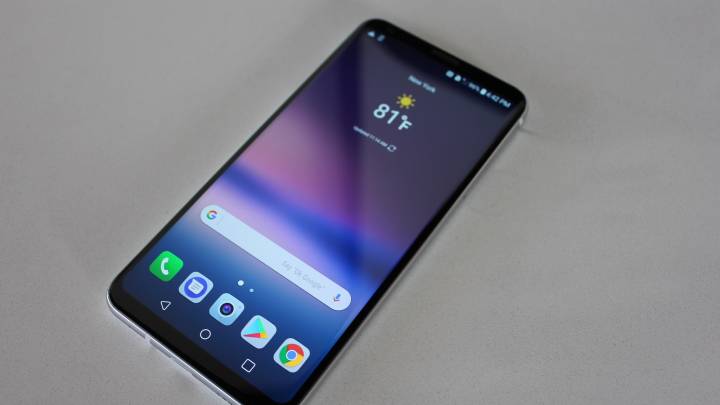 I had a chance to go hands on with two flagship Android devices this month before they launched.

The first was Samsung’s Galaxy Note 8, which is a solid, if unexciting, upgrade over the Galaxy S8 and S8+. The second was LG’s V30, and while it won’t receive the same kind of attention reserved for a new device from Apple or Samsung, I was pleasantly surprised with the flagship phone. In fact, while it doesn’t have quite as many bell and whistles as the Note 8, I think I might actually prefer it to the Samsung phablet.

Two things stand out when you pick up an LG V30 for the very first time. One is the 6-inch QHD+ FullVision OLED display, which is among the warmest and brightest I’ve seen on a smartphone this year. The V30’s screen doesn’t quite reach the left and right edges of the phone, but with an 82% screen-to-body ratio, it still looks like you’re holding a floating screen in front of your face any time you pick the phone up.

The other thing you’ll notice is the size of the phone. Measuring in at 151.7 x 75.4 x 7.39mm and just under 160g, the V30 is slightly wider than the Galaxy S8, S8+ or even the Note 8, but is noticeably thinner than each of the Samsung phones. It’s also nearly as light as the S8, despite the screen being larger. In other words, it’s an incredibly sleek phone that feels great in the hand, especially if a phablet is a bit too much for you.

In terms of power, LG’s V30 is on par with most other Android flagship phones released in 2017. The phone comes equipped with a Snapdragon 835 processor, 4GB of RAM, 64/128GB of internal memory (with SD card support up to 2TB), 3,300mAh battery, wireless charging and IP68 water and dust resistance. The V30 also has a dual camera setup on the back (16-megapixel telephoto lens and 13-megapixel wide angle lens) as well as a 5-megapixel selfie camera. It’s also worth noting that the resolution of the display comes in at 2,880 x 1,440.

While many of the Note 8’s best gimmicks revolve around the S Pen, LG opted to focus on the camera and the audio of the V30 to make it stand out among the crowd. Even before LG officially announced the phone at IFA on Thursday, the company had revealed that the V30 would be the first phone to feature an f/1.6 lens aperture, which deliver 25% more light compared to the f/1.8 lens you’ll find on most modern smartphones. Furthermore, LG has embedded a glass Crystal Clear Lens within the camera to collect even more light and to allow for more accurate color reproduction. This could be one of the best smartphone cameras on the market.

In addition to the first-in-class specifications, LG has also included several fascinating camera features that should make the V30 even more tempting for anyone who uses their smartphone as a camera as often as they use it to place calls or send texts. Cine Video was the first feature that LG showcased, giving the user the ability to record “cinema-like video with professional color grading.” In effect, the feature just lets the user choose between 16 different filters, but they all looked great in the limited amount of time I had to test them.

The other standout feature is Point Zoom, which allows V30 users to tap on a specific point on the screen while filming a video and zoom in on that point. You no longer have to zoom in on the center of the video, and you can even choose what speed you want to zoom in on the area you select.

Audio was another key for LG, and the Hi-Fi Quad DAC is said to deliver a “superior acoustic experience.” The V30 features two digital mics that combine sounds from the receivers to kill distortion and it also happens to be the first phone to support Master Quality Authenticated technology, which allows for easy streaming of high-resolution audio by folding the original studio master into a small file.

LG will launch the V30 in South Korea on September 21st, with North America, Asia, Europe, Africa and the Middle East to follow soon after. The 64GB model of the V30 will be available in four colors: Aurora Black, Cloud Silver, Moroccan Blue and Lavender Violet, though not all colors will be available in every market. The LG V30+ with 128GB of storage will be available in limited markets as well.