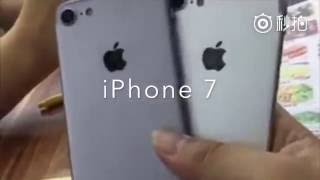 We’ve still got two months to go until Apple officially unveils the iPhone 7, but the big press conference is looking more and more unnecessary. We’ve already had numerous looks at the outside of the phone, rumored specs, and even processor benchmarks appear out in the wild.

The next step on the leaky train is for video of an iPhone 7 to emerge, and right on schedule, a Chinese Weibo user has come through with this (grainy, unverified) clip.

It is very possible that the video is a fake, either using CGI, an old prototype that’s not going into production, or just a dummy model. But it matches up closely with previous leaks we’ve seen, which indicate that the iPhone 7 is going to mostly copy the design language of the previous two iPhones: aluminum unibody case, rounded edges, a larger camera opening, and new antenna design.

The only real diversion I’m seeing from the pattern is the camera opening, which looks more pronounced in this video than in some other leaked photos. But that’s exactly the kind of more minor design revision that gets left to the last minute.

If all the leaks do indeed pan out, we’ll be left with one hell of a good-looking handset. Some people are branding the iPhone 7 as being “boring,” which from a design perspective is understandable, since not much has changed. But if you think of it as a refinement of a great design, rather than a lack of innovation, then what you’re left with is a sleek, polished handset that’s gone through a few revisions to get to its final form.

With smartphone design flattening out and trending towards thin metal rectangles, it’s unrealistic to expect some sleek new design every two years. Instead, the changes with the iPhone 7 are more likely to be software based, which is what we saw from Apple’s WWDC last month. Provided that Apple can pull off all the AI smarts and software changes it showcased in June, the iPhone 7 will prove to be beautiful and exciting.

If not — well, Apple might just be left with an expensive, familiar failure on its hands.