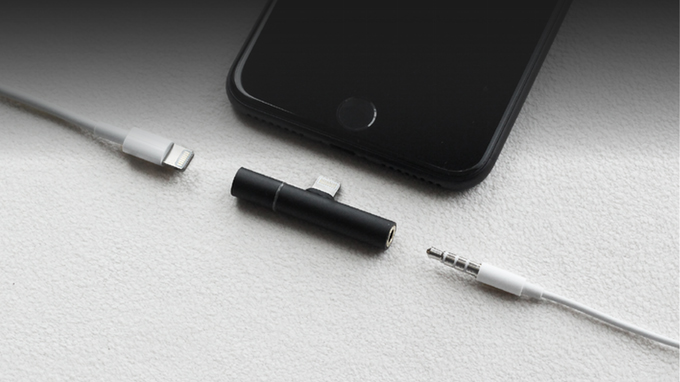 Every iPhone 7 ships with a headphone adapter in the box, as it should. The Apple-designed dongle looks exactly like you’d expect: white, simple, and drawn up in three minutes by the most recent graduate of the Jony Ive School of Design.

Dongles aren’t exciting technology, for sure. But if someone had spent the extra few hours working on the concept, maybe they could have come up with something as good as this.

DON’T MISS: This is what happens if you try to sneak a Galaxy Note 7 onto an airplane

Auxilite is a Kickstarter for a dual Lightning port/headphone adapter, which should allow you to use normal headphones with an iPhone 7 and also charge the device at the same time. It’s not even close to being the first dongle to do that, but it stands out for design that looks good. Rather than having a bulky dongle hanging off the bottom of your phone, it’s a reasonably good-looking cylinder with one port on each end.

Unlike the other adapters on the market, I could actually see myself leaving this on my phone for days at a time. There’s no cable sticking out at 90 degrees to your phone, so you shouldn’t break off the Lightning connector every time you put your phone in your pocket. It also adds a white LED light to confirm that your phone is on charge, which is a neat touch.

Of course, there’s the elephant in the room: Auxilite is a Kickstarter, and the listed $9 early-bird price is a very small amount of money for a good quality iPhone accessory. The design in this instance seems pretty solid, and nothing in the adapter seems to be breaking the laws of physics.

But manufacturing something this cheap — with a custom metal housing — takes experience and connections, especially given the promised delivery date of January 2017. Kickstarters get delayed all the time, and when you’re charging $9 to design, manufacture and ship a product, there’s not much wiggle room left.