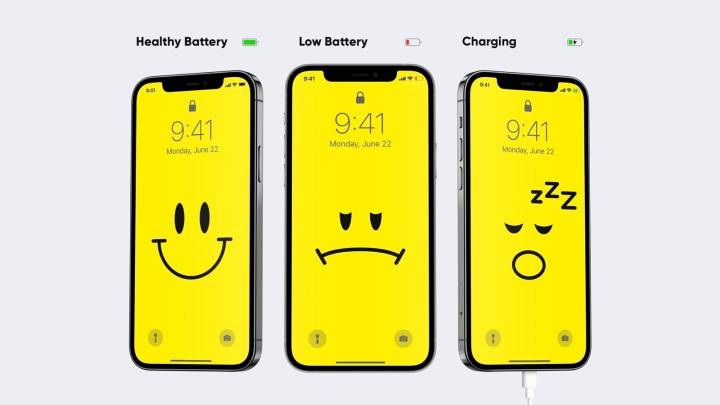 The image above shows three iPhone 12 units, each featuring three different wallpapers. But upon closer inspection, you’d realize it’s the same iPhone 12 device rocking a type of wallpaper that’s not exactly available on iPhone. The image rotates depending on a specific action, in this case, your worst smartphone fear. They match the iPhone’s battery life. It’s a brilliant contraption that anyone can set up on their iPhones without jailbreaking the handset. It’s all possible thanks to a different iPhone functionality that’s already built into iOS.

It’s 2021, but smartphone battery life is still a concern. We still wonder how big the phone battery is, and we want to know how long it’ll last even before we order the device. That’s despite the various technologies that should make battery life concerns a thing of the past. Some phones deliver better battery than others but pick any of the newest handsets, and you’re likely to get excellent battery life. Last year’s iPhones and Androids also qualify.

Smartphone components are more efficient than ever, and battery capacities have steadily increased in recent years. On top of that, all new smartphones support significantly faster charging speeds, and many of them come with wireless charging support. This makes it even more convenient to recharge the handset during the day.

Still, if dropping battery life freaks you out, then Ben Vessey’s smart iPhone wallpaper trick might help. As you’ve probably guessed by now, the wallpaper rotates depending on the battery state. You get to choose a different home and lock screen for healthy battery, low battery, and charging mode. That way, a quick glance at the screen will tell you all you need to know about it.

iOS doesn’t offer this kind of iPhone dynamic wallpaper functionality, however. So Vessey took one of the great iOS features that could pull it off, the Shortcuts automation app built into iOS.

The Dynamo wallpapers that Vessey devised aren’t an iOS app, so you won’t find them in the App Store. You’ll have to purchase the two packs, each containing three sets of dynamic Wallpaper, directly from Vessey’s website.

Each pack costs around $5.50 and comes with a video and PDF instructions to make it all work. There might be no jailbreaking involved, but you will need to set up shortcuts to change those wallpapers depending on battery life. If you’re already well-versed in setting up automation on iPhone, then you might already know how to set up such shortcuts. You could use any images as battery life indicators, as long as they’re descriptive enough for the battery states shown above.

You’ll need an iPhone 6s or later to make it all work on your own or with Vessey’s dynamic iPhone wallpapers, which are available at this link.