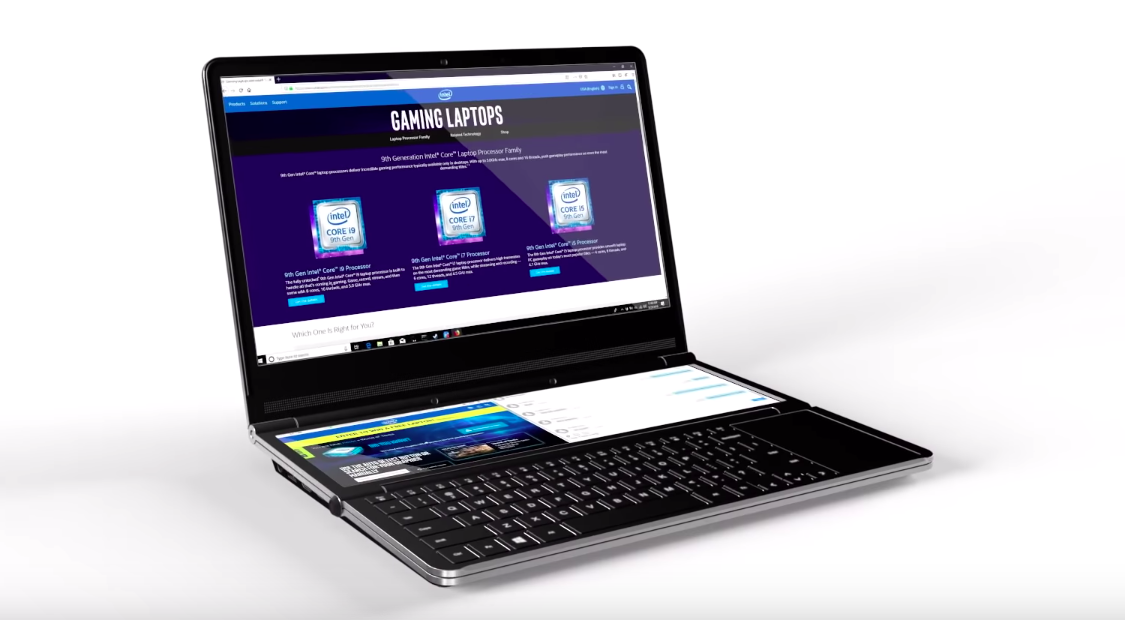 Computex 2019 is underway in Taiwan, and we’ve already seen a bunch of exciting news coming out from the trade event concerning the future of computing. Intel’s powerful new chips for ultraportable devices will make Full HD gaming possible on ultra-thin laptops, and ARM has unveiled the next-gen reference mobile chip designs that will power next year’s flagship Android handsets as well as a slew of always-on 5G laptops. On top of that, we saw a few smartphones come out of Computex, as well as a slew of laptops that will hit stores soon. But Intel’s dual-screen gaming notebook prototype is certainly a notable device, and that’s not just because of that folding mechanism.

Earlier this week, Asus unveiled the ZenBook Pro Duo laptop, which features two distinct displays, including the main 15-inch OLED panel, as well as a secondary “ScreenPad Plus” 14-inch screen that sits on top of the keyboard. It’s the equivalent of the TouchBar on some MacBook Pros, but much better, as the secondary display actually features a lot more screen real estate than the Touch Bar to display actual apps. The problem with this design is that the second screen forces you to look down at the keyboard, which is certainly not a great experience:

Intel, on the other hand, has a better idea, although it might take a while to get used to it. The laptop in the following images is a powerful gaming rig that will probably run plenty of your favorite titles with the help of a 45W Core i9 processor and an NVIDIA GTX 1070 GPU. But while you play on the main 15.6-inch screen, which is raised to your eye height when unfolded, you also get to take advantage of the secondary 12.3-inch display that can run other apps that you might want to check out while you game. Here’s what it looks like:

That second screen might come in handy while you do other things as well, giving you the convenience of a secondary display on the go. According to Engadget, the primary screen tilts upwards at whatever degree you like and stays in whatever position you set it to. A button on the hinge lets you unlatch and close the lid.

Like I said before, there’s a second trick to this Honeycomb Glacier prototype concept that should make it even easier to switch between the two screens. That’s the Tobii eye-tracking feature that will automatically detect what screen you’re looking at and switch to it accordingly. Cameras and sensors sit in the hinge between the two screens, and they’ll be able to tell whether you’re eyeing the primary or secondary screen and adapt keyboard use accordingly. Tobii can even tell if you’re looking at Cortana — this is, after all, a Windows 10 machine — and power up the assistant to take requests.

Intel doesn’t sell laptops of its own, so there’s no telling whether any of its partners will bring something similar to market. The closest thing to it is, for the time being, the Asus ZenBook Pro Duo.