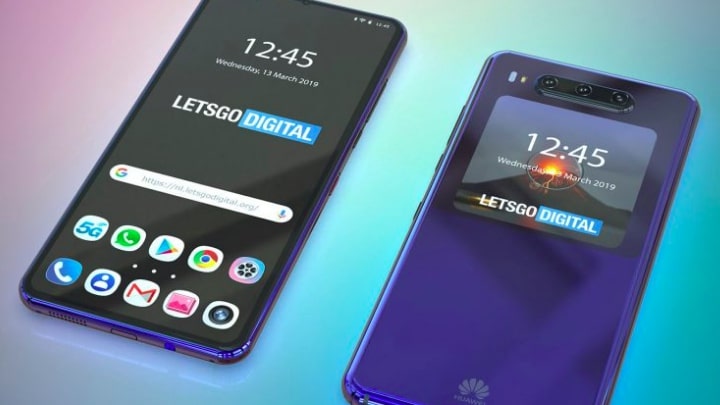 Huawei is continuing to ship well-regarded smartphones, despite the Chinese brand’s widely publicized troubles with US authorities, and it will continue to do so later this month with the launch of its high-end P30 series of devices. They’re some of the best-designed smartphones that you nevertheless won’t be able to your hands on — most of you who are reading these words, at any rate — and, moreover, the company has also been working behind the scenes to show it still has a few other design tricks up its sleeve.

A new Huawei patent has been spotted for a smartphone design that could make its way to future Mate devices, a design that’s centered around a triple-camera setup on the back of the phone with an extra screen directly below it.

The patent was published at the end of February by the European Union Intellectual Property Office and the WIPO World Intellectual Property Office, and the patent was spotted by Dutch tech news blog LetsGoDigital. The blog is also the source of the color renderings you can see above, which shows a full screen on the front with no apparent camera and then the features we mentioned that are on the back.

The front design resembles the P30, though with a smaller notch that presumably houses a face recognition sensor. As far as the horizontal triple-lens setup on the back, one lens is different than the other two and given a square shape that suggests the same periscopic camera system as found in the P30. The other thing that’s instantly noticeable from the design documentation Huawei prepared is the presence of an extra screen on the back, with the whole thing seeming to be a workaround for taking and polishing selfies without a camera on the front.

Huawei isn’t the first to try this. The Vivo NEX Dual Display released in late 2018 likewise sported a second display, but Huawei put a bit of a different spin on that idea by not putting a front camera on this new design while seeming to keep the facial recognition sensor housed in the front notch (for that Vivo device, face recognition is done via a rear display).

Given that this is a patent, there’s no guarantee Huawei will do something along these lines. But it will be interesting to see if any of its new Mate devices go down this route — and what’s more, we won’t have to wait long to see if that’s the case. The next Mate 30 phones will be introduced later this year.